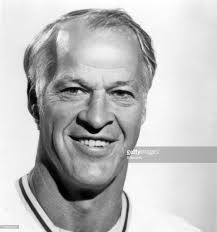 I am old enough to remember Gordie Howe in his prime. Barely. I have vague black and white TV memories of Howe scoring goals for Detroit in the late 1960’s against my beloved New York Rangers..

However, I am plenty old enough to remember Howe playing for my hometown Hartford Whalers. That’s because Gordie was old when he played in the World Hockey Association. Really old. His last season in a Hartford jersey came in 1980. He was 52. What’s even more mind-blowing is that he was named the WHA’s Most Valuable Player at age 46. That would equate to Peyton Manning being named the NFL’s MVP in 2022.

As a teenager I often wondered how Howe could compete with guys 20-30 years younger who were clearly quicker, stronger and faster on skates. There were two answers.

The first was because he was Gordie Howe. In many ways he was the first Wayne Gretzky in that he had a Mensa-level hockey IQ. His front line with Alex Delvecchio and Frank Mahovlich has often been credited with designing what we would today term as ‘set pieces’ when describing soccer goals.

The other was pointed out to me by a friend who was a Whalers season ticket holder: “Watch Gordie when he plays,” he confided in low tones, “he’s the dirtiest SOB on the ice. No WHA official is going to call a penalty on a 50-year old legend for hooking a 25-year old guy who you’ve never heard of.”

So I watched. My friend was right. Gordie hooked, cross-checked and elbowed his way through his final season in 1979-80. While at the time I found it to be disappointing, it was a lesson that turned out to have real world applications for me just a few years hence.

Our neighborhood had a Thanksgiving tradition that spanned over a decade. It was called the “Turkey Bowl.” On that Thursday morning, usually with temperatures in the 30’s, we would play pick-up football. Most years we would just pick up sides among friends and relatives. But on two occasions our neighborhood guys would team up against random guys from other neighborhoods. The first time we got slaughtered. They were just better athletes.

The second time came several years later. By then most of us were in our mid-to-late 20’s and we were no longer as skilled, agile or fast as we once perceived ourselves to be. The team we picked up against was made up of mostly teenagers and college students. On paper, we should have got hammered again.

But we won…..and I learned the value of playing like Gordie Howe. We grabbed jerseys. We blatantly held at the line of scrimmage. The game winning touchdown came on a pass play in which my brother found me cutting open on an in pattern where I first illegally blocked the guy covering me just as my brother was releasing the ball. I even spiked the ball because I kinda knew the truth.

That truth was that we had played our last Turkey Bowl. The next day most of us were so sore that several Carling Black Labels in front of the tube couldn’t mask the fact we couldn’t come close to touching our toes. Or knees.

I think I was 26. That’s exact half of Gordie Howe’s 52 years when he finally hung up what must have been the world’s most well worn pair of hockey skates. He was smart……and just a little bit dirty.

And I can’t ever remember ever having so much fun playing ball at any other time. You go Gordie. RIP.

Growing Up with Muhammad
OJ Doc Is Worth Your Time