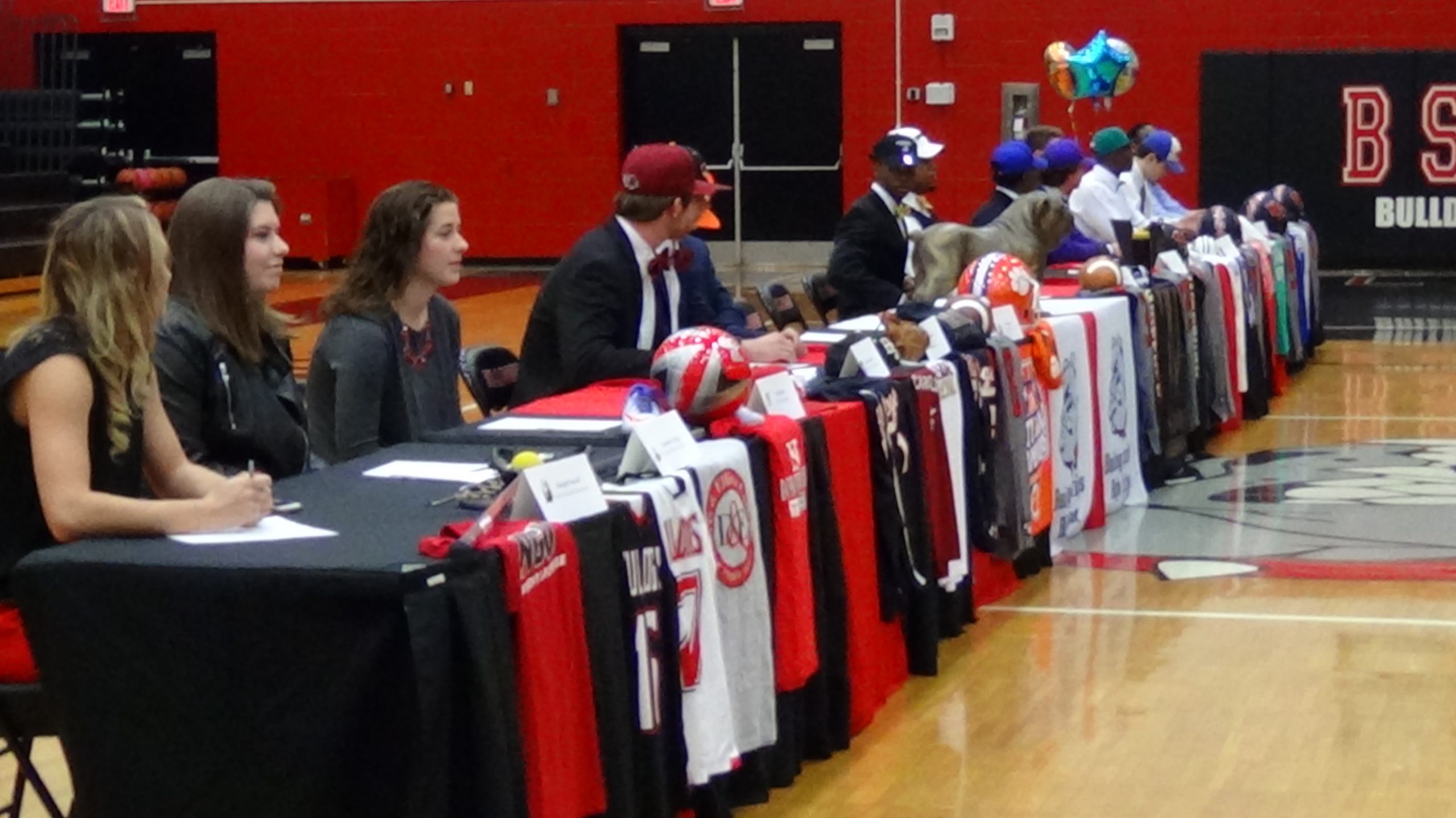 Bulldogs will continue careers in college

With Wednesday being National Signing Day there is excitement in high school gyms all across the country as student athletes make decisions about their college futures and at Boiling Springs it was no different as the Bulldogs had fourteen students sign national letters of intent to continue their athletic careers at the collegiate level next season. Of the fourteen students that committed on Wednesday, nine committed to play football, two for baseball and girls lacrosse, and one from the Lady Bulldogs soccer team.

On Wednesday Boiling Springs had a member of their football program join the reigning college National Champions as wide receiver Will Brown accepted a preferred walk-on spot with the Clemson Tigers. Brown was an All-Region selection this past season as he recorded 82 receptions for 1,280 yards with 13 touchdowns. When asked about his decision to play for the Tigers Brown said, “It feels great and it’s been a lifelong dream of mine. I grew up going to Clemson games and this is just a dream come true.” Brown wasn’t the only player that signed with a school that’s been celebrating a national championship lately as North-South linebacker Chris Evans signed to play football with Coastal Carolina. Evans was an All-Region selection this past season as he recorded 55 tackles, 10 sacks and 7 tackles for loss. Evans said about his commitment to Coastal, “It’s a blessing. I just never thought this day would come but here it is.”

The Bulldogs had three football players that will be joining a local college rivalry next season as Shrine Bowl offensive lineman Chad Gardner and North-South defensive back Donavan Anderson chose to sign with Wofford. When those two take the field next year for Wofford against Furman they’ll see a familiar face as Bulldogs’ kicker Grayson Atkins signed on Wednesday to play next season for the Paladins. When asked about the chance to play against his fellow teammates at the collegiate level Atkins said, “I told Donavan if I kick it to him and he runs it back I’m going to have to tackle him and get in his face,” Atkins also added with a laugh, “I have to be able to catch him first though.”

Mikail Coleman, a starting safety for the Bulldogs football team this past season, will continue to be a Bulldog at the college level as he committed on Wednesday to continue his athletic career at SC State. Coleman this past season recorded 64 tackles,3 for a loss, and had four interceptions. When asked about his commitment to SC State Coleman said, “I feel really good about it, I’m just ready to continue this journey.” Michael Bollinger who played tight end for Boiling Springs committed to continue his football career at Liberty. Bollinger finished his career with the Bulldogs with thirty-seven receptions for 550 yards and six touchdowns, two of them coming in the state championship game against Dutch Fork.

Boiling Springs also had two members of their defensive line commit to Limestone College as Trey Jones and Joseph Gregory both committed to the Saints on Wednesday. Jones recorded twenty tackles with five tackles for loss and one sack for the Bulldogs this past season. Gregory recorded forty-five tackles with five for loss and six sacks for the Bulldogs. When asked about this opportunity to continue his football career at Limestone next season Gregory said, “I feel great, to be one of the first people in my family to go to college and to get to play a sport I love it’s just great.”

Two other members of the football team also committed on Wednesday but it was to play baseball at the collegiate level. Mason Streater, quarterback for the football team, committed to play baseball at South Carolina next season. Streater this past season was named the 2016 SCHSL 5A Offensive Player of the Year. When asked about his commitment to South Carolina Streater said, “It’s a good feeling. I’ve been waiting on this for a while and I’m just ready to go.” When asked about the chances of him possibly seeing time on the gridiron Streater said with a laugh, “No, that’s probably not going to happen.” Justin Brasher, another member of the football and baseball team, committed to play baseball at Erskine. Brasher is a four year letterman for the Bulldogs baseball team and was All-Region in both his sophomore and junior year.

With the fourteen commitments on Wednesday added to the five that signed in the fall, that now makes nineteen current commitments for the Bulldogs athletic program that will be playing college athletics next season.