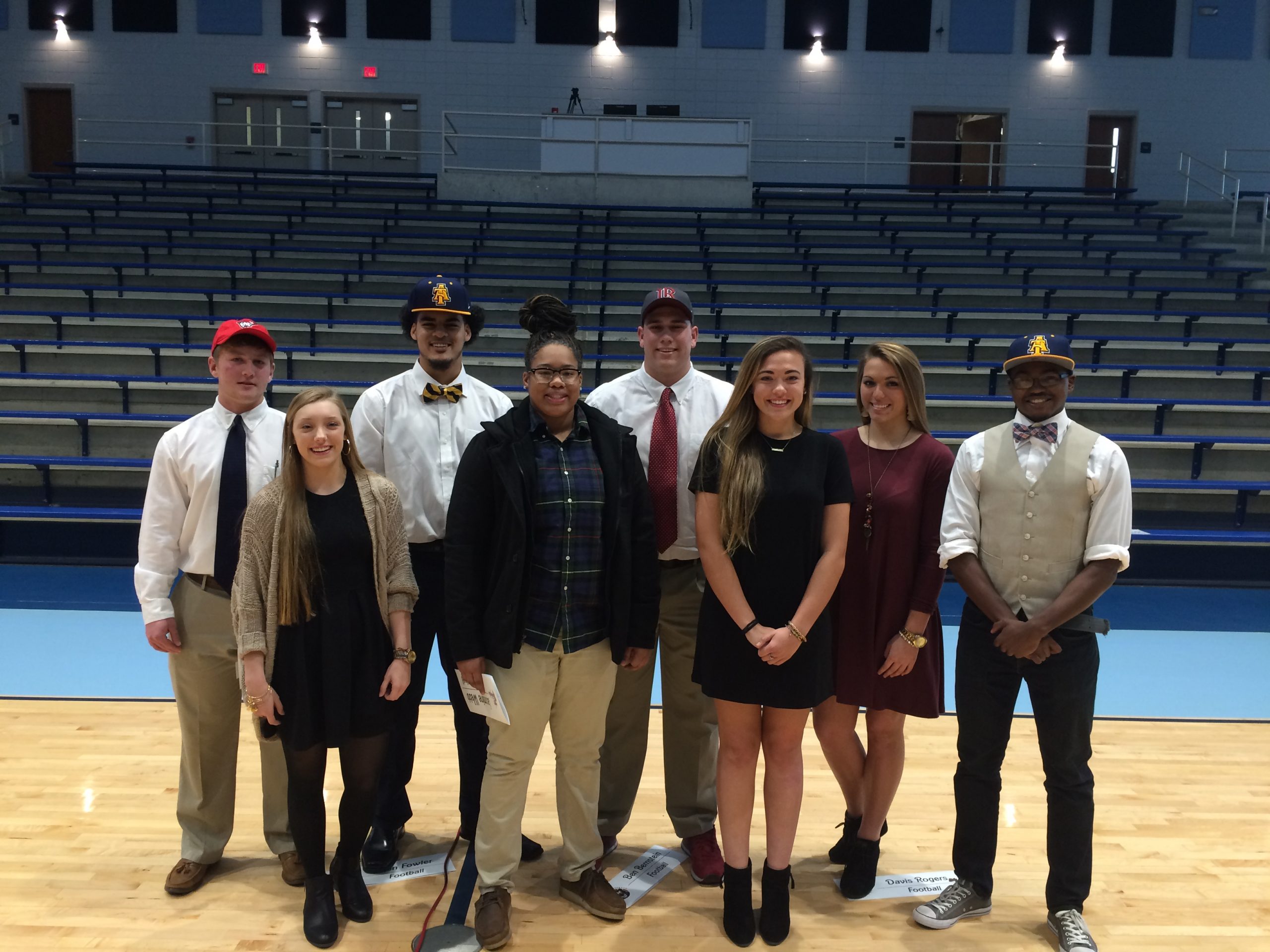 Eight Dorman athletes signed scholarship offers on Wednesday and will continue their careers in college.

Jasmin Webb will stay local, playing basketball at Converse. Webb is averaging a double-double for the Lady Cavaliers, and coach Val Whiteside said she was a valuable part of the program.

“From the first week I saw her, when she asked to practice with the varsity after she was done with JV practice, I saw her ambition and potential,” Whiteside said. “Converse is getting a high-character player with a strong work ethic.”

Webb likes the staff and the welcoming atmosphere at Converse.

“It just felt like the school for me,” she said.”

“We knew right away she’s special,” coach Amy Bailey said of Rogers. “She has a bright future, and I know she’ll continue to excel.

Rogers said she enjoyed the camaraderie between teammates at Boston, and feels like she’ll fit in.

“I was also looking for a competitive academic program to continue my education, and Boston offers that,” she said.

Katie Swad and Morrison Trnavsky have been a part of three very successful soccer programs for Dorman. Swad, a defender, will play at Erskine. A center defender, Swad has contributed to 32 shutouts during her career as the Lady Cavaliers compiled a 51-17-1 overall record. Trnavsky, a midfielder/forward, has contributed to a very successful Dorman offense during the same period. She will play at Furman.

“I liked the close feel of the campus and the fact they welcomed me in at Erskine,” Swad said. “I also like the vision of the coaching staff. They have high expectations, and I think they’ll challenge me athletically and academically.”

Trnavsky loved the atmosphere and environment at Furman.

“It offers me a good balance of academics and soccer,” she said.

Bernstein, an offensive lineman, will play at Lenoir-Rhyne.

“I feel like it’s a place where I can grow in my faith, grow academically and athletically, and become the young man I want to be in the future,” he said.

“He’s one of our hardest workers,” Lancaster said. “He’s always going to give you his best. We’re very proud of him.”

Storch, a tight end, will play at the University of the Cumberlands.

“It just felt like home,” he said. “They have nice facilities and a good academic program, and I’m looking forward to getting up there.”

“I’ve know him since ninth grade and he’s worked himself into a starting spot,” said assistant coach Marcus Black. “In my opinion, he’s one of our most improved players this year. He had 19 catches and nearly every one of them was on a critical third down. Cumberland is getting a tough kid who’s willing to work very hard.”

“The coaches and players just made me feel like it was where I wanted to be and where I needed to be,” Fowler said.

“He just kept waiting, kept leading in his own way, and he had tremendous success for us,” Farmer said. “He’s an outstanding leader and a great competitor. He’s very tough, very gritty, and he worked hard to improve his skills. He had probably one of the most productive seasons for a quarterback, and I feel like the sky’s the limit for him.”

Rogers is among the top point-scorers in Dorman history, and special teams coordinator Darryl Smith said he’s got a bright future.

“Davis has earned his scholarship,” Smith said. “He’s put in countless hours and gotten better and better. We’ll miss him.”

Rogers said the connection to home made the school a great fit.

“The coaches and the team gave me a sense of family, just like Dorman,” he said. “The players took me in and made it feel like home.”