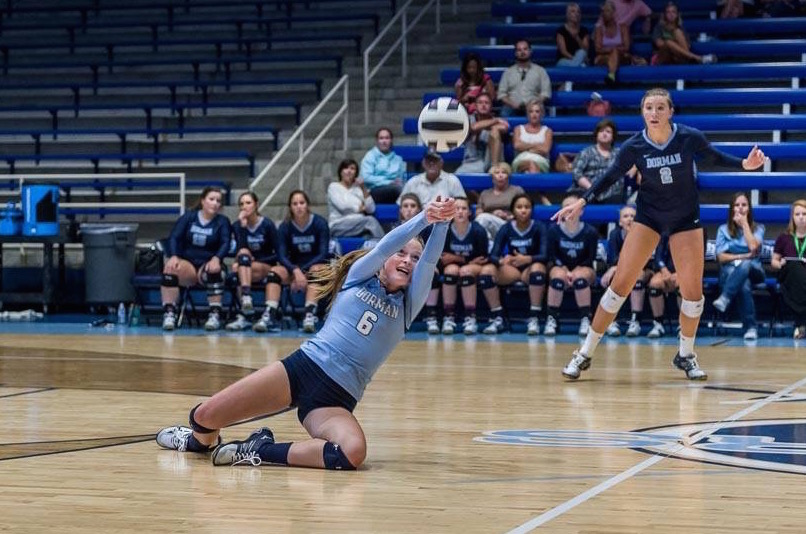 Anna Renwick might not have been born to be a defensive volleyball player, but those instincts didn’t take very long to kick in.

Renwick, Dorman’s libero (defensive specialist), recalls getting an early start on digging out shots coming her way, courtesy of another future Lady Cavalier.

“All the way back to when I was about four years old and Thayer (Hall) was about six, my brother and hers were on the same travel baseball team,” Renwick explained. “Every tournament they had, the only place you could find us was at an open area and all you would see is us hitting at each other, working on making each other better. We’ve had an unbreakable bond since. She helps me a lot. ”

Renwick became the latest player from Dorman’s extraordinary 2016 team to earn a mention on a national superlative list. She was named a prepvolleyball.com Frosh59, one of the top varsity-playing freshmen in the country.

That award comes as no surprise to Dorman coach Paula Kirkland, who handed out high praise in her comments to prepvolleyball.com

“She is by far the best defensive player I’ve ever had in my 35 years of coaching,” Kirkland said.

Renwick had a stellar freshman season as the Lady Cavaliers compiled a 46-2 record, a 5A state title and three national rankings. She played in 121 of 122 sets, leading the team in digs with 434. She had 626 serve receptions with only 59 errors, served 43 aces and scored 228 points on serve. She added 68 assists during Dorman’s championship season.

Renwick said she was honored to have been selected for the list.

“I was honestly surprised. It’s definitely a huge honor,” she said. “Dorman prepared me every step of the way between the workouts and practices every day of the spring and summer and the great coaching we had. It really makes you want to push yourself when you have great coaches like Coach Kirkland, Coach Kibler, Coach Wiles and Coach Steadings by your side.

Renwick made her mark despite the Lady Cavaliers being an upperclass-heavy team.

“I was able to jump right into this amazing team by how much they welcomed me in,” she said. “They welcomed me with open arms and all the players and coaches really believed in me from day one and pushed me every day to meet the goal we were all striving for. I have the best teammates you could ask for.”

Renwick hones her craft in the offseason with Club volleyball,, playing in the Upward Stars organization. She is looking forward to Dorman workouts beginning in the spring, and is excited to have the opportunity to try out for the United States junior national team. She’s also had some time to reflect on what Dorman accomplished last season.

“It’s something I’ll remember my entire life,” she said. “Dorman has always had a very strong volleyball program and I was honored to be a part of this championship team as a freshman. I was excited to be able to play a part in the successful season with the help of my teammates and coaching staff.”