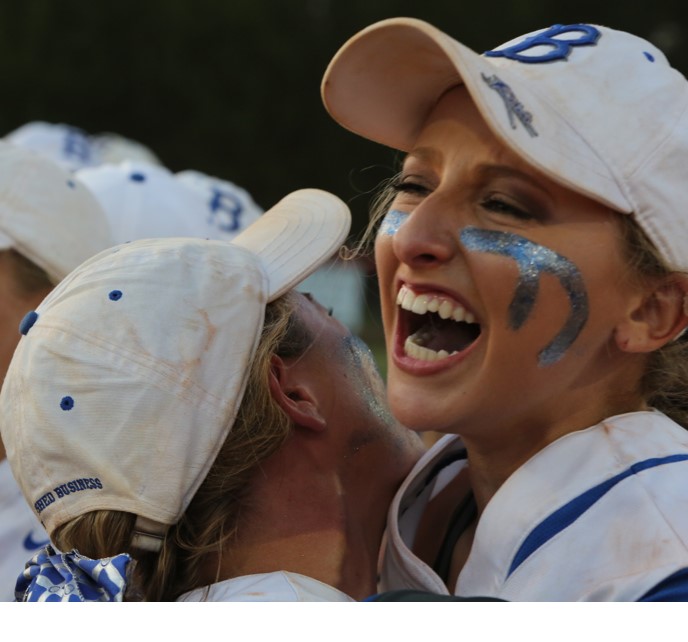 That phrase has driven the Byrnes softball team since a loss in last year’s 4A state championship series. It’s tagged in their tweets. It’s stitched on their hats. It’s something they lived and breathed for 363 days.

Friday night, they erased it.

Byrnes rallied from a 4-0 deficit to beat White Knoll 7-3 in the third and deciding game of the 5A state championship series at Clinton High School. The Rebels wrapped up their fourth state title in program history, and their second in four years.

“We talked about leaving it all on the field today,” Byrnes coach Brandi Aiken said. “We talked about answering, and they did that. They were really relaxed today. They just seemed really focused, and that’s when we play our best. It was a team effort. I feel like all nine contributed.”

Catcher Tatum Arboleda, a seventh-grader on the state title team in 2014, said last year’s heartbreak was a constant motivator.

“It feels amazing,” she said. “We put in the work, because we never wanted to feel like that again. It’s been 363 days. We wanted this so bad.”

Byrnes certainly didn’t do it the easy way. After blasting the Timberwolves 13-1 at White Knoll in the first game of the series, Byrnes fell at home 4-3 in game two and fell behind midway through the deciding contest.  White Knoll used a big third inning to jump out to a 4-0 lead behind singles from Briannah Workman, Taylor Antley and Ariel Johnson. Hannah Goodwin doubled to drive in two runs, Ginna Leaphart singled to plate another, and a fourth run scored on Andrea Lyon’s fly-ball out to left field.

Byrnes wasted no time in cutting the deficit in half. Kassie Rimel and Arboleda walked to lead off the home half of the third, and Christa Whitesides advanced both on a perfect sacrifice bunt. Kasey Widmyer singled to drive in a run and a deep fly ball from Haven Pesce plated another as Byrnes trimmed the lead to 4-2.

Byrnes scored another run in the bottom of the fourth on singles by Parker Birch and Hayden Bradley, a sacrifice by Haley Whitesides and Arboleda’s RBI groundout.

In the fifth, Byrnes put the game away. Singles by Widmyer, Pesce and Amber Campbell started the rally, and after a fielder’s choice Bradley blasted a double to score two runs and give Byrnes the lead for good. Haley Whitesides drove in a run with an RBI groundout, and Rimel doubled to drive in Bradley with the Rebels’ final run and a 7-4 advantage.

Bradley was thrilled to provide the tying and winning runs.

“She gave me something outside and down the middle,” she said. “It was kind of out over the plate and it was easy to make an adjustment. I kind of got under it a little, but they had squeezed in on me because I’m a slapper, and I just blooped it over their heads. When I hit second base, I was ecstatic. There are no words.”

Widmyer was brilliant in the circle the rest of the way for the Rebels. She allowed just one baserunner past the third inning, with that runner reaching on an error, and recorded four of her seven strikeouts in the late frames.

In the seventh, Widmyer coaxed a groundout and a fly ball before Workman lofted a soft liner just over the pitcher’s mound. Birch, the Rebels’ only senior playing in her 163rd career game, sprinted to her left and laid out, coming up with the ball and touching off a wild celebration for Byrnes.

“Everybody was telling me they felt like it was coming to me,” Birch said. “Honestly, I was just ready. It was just icing on the cake. It was a pure bliss moment, just thinking about all the hard work we’ve done to get here.”