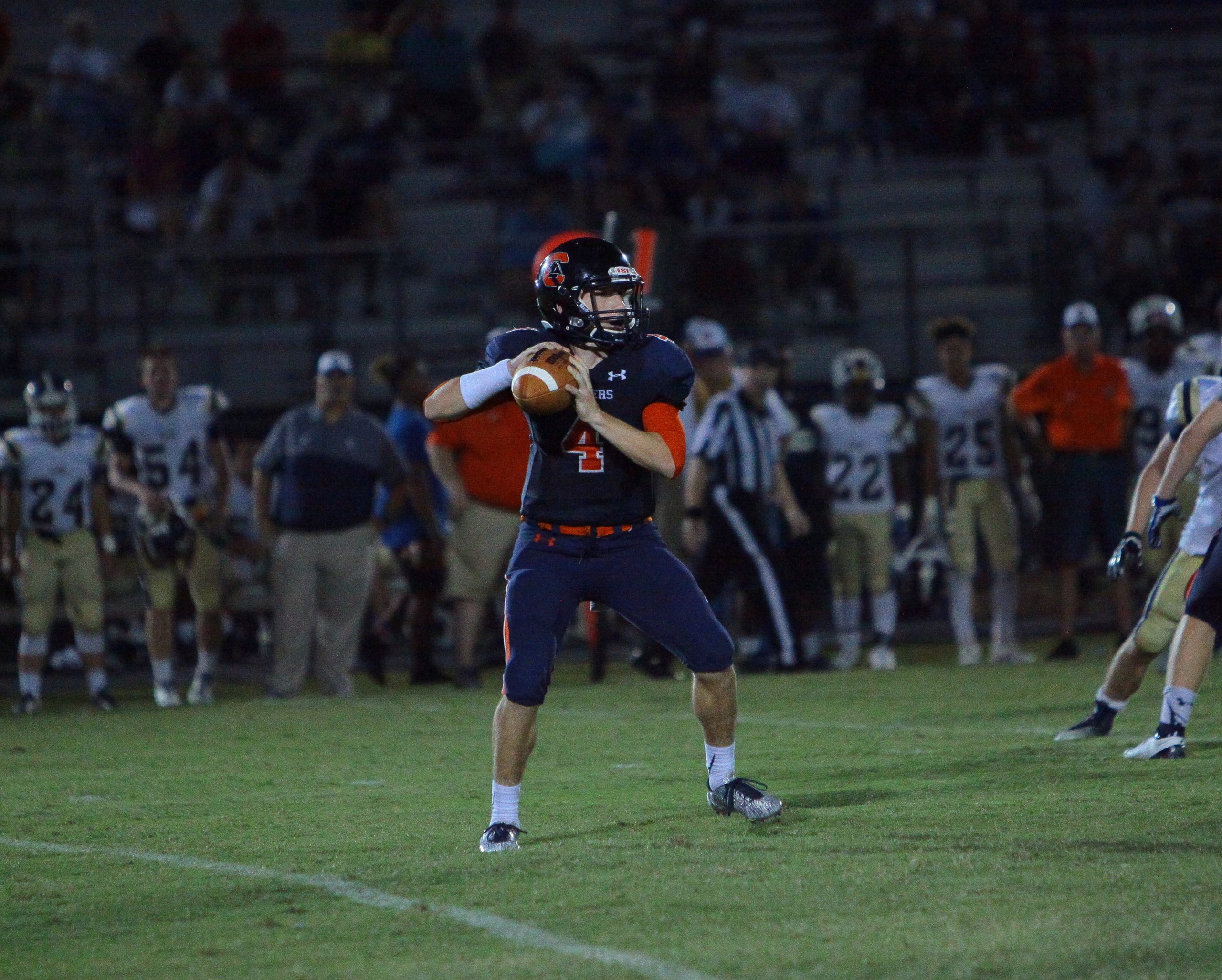 –How do the Chapman Panthers deal with being the top dog?

Coach Mark Hodge brings back a very fast, and experienced team this year.  The defending 3A State Champions return senior quarterback Colton Bailey, as well as an abundance of talent at the skill positions on the outside. Senior running back DJ Twitty, as well as senior wide receivers Patrick Phongsat and Richard Tucker give the Panthers a deep and balanced offensive attack that few teams in the state can match. Defensively they return several starters on a unit that relied heavily on turnovers, as inconsistent tackling lead to countless big plays for the opposition. Last season, Chapman was dubbed a dark horse heading into the playoffs after going just 3-2 in region play. This year will be a bit different as the preseason  #1 -3A team will be guaranteed to get everyone’s best shot. Motivation will be key for Coach Hodge’s squad this year, but a deep roster and a schedule that has the Panthers playing region foes Woodruff, Newberry and Broome all at home, means an undefeated regular season isn’t out of the question. All the pieces are in place for Chapman to make a run at a second straight title, but how they handle the pressure of being on top of the mountain remains to be seen. I’m guessing Coach Hodge has the kids focused on the task at hand, and the Panthers are in for another long postseason run that might have them back in Columbia come December.

–Was Boiling Springs a One-Year wonder?

Last season the Bulldogs reached unprecedented heights. A Region III-5A title, a 13-2 record and an Upper State Championship capped off a historic season for Coach Rick Tate and his players. So where do they go from here? Questions abound for the Bulldogs, as they return just 3 starters on both sides of the ball.  Gone are playmaking quarterback Mason Streater and all-world kicker Grayson Atkins. Gone is the experience along the offensive line, and gone are the lockdown defenders that helped them to shut down Spartan High’s powerful offense in the playoffs. But not all hope is lost. The Bulldogs still have good team speed and junior quarterback Dawson Taylor is an excellent athlete (he’s committed to play baseball at South Carolina). While lacking in experience there is still plenty of optimism in Bulldog land, as the team had several strong outings in 7-on-7 tournaments throughout the summer. Will they build on last year’s success, or will the inexperience cause them to fall to the likes of more traditional football powers like Byrnes, Dorman and Gaffney? I’m betting on the latter.

Well I’ll start with the obvious here. Gaffney is the only team in the region that is returning a senior starting quarterback. Tyshun Sarratt is a dual-threat quarterback who passed for over 2,300 yards and 22 touchdowns as a junior, while at times carrying the Indians offense by himself. Game planning for Gaffney will be a nightmare as his athleticism and experience will cause problems for opposing defenses throughout the year. Byrnes’ Brock Carroll is the next most experienced signal caller in this region.  He appeared in 8 games as a sophomore last season and finished his campaign with 1,286 yards and 10 touchdowns through the air. With limited snaps and a new coach, it’s still unclear how effective the Rebel’s offense will be against the more athletic defenses they will face in region play. As for the others, Dorman seems to have found their man in Ben Batson, a senior who is expected to do damage with both his arms and legs for the Cavaliers. Boiling Springs will look to Dawson Taylor to carry on the Bulldogs recent tradition of great quarterback play as they come off the most successful season in school history. And finally, the Spartanburg Vikings are preparing on playing two quarterbacks. Juniors Keonte Cartledge and Jax Cash are both expected to play, with Coach Miller planning to ride the hot hand early in the season. Spartanburg is stacked at the skill positions and on defense, which could help mask any quarterback issues they may have early in the season. All in all, I expect  Sarratt to be stellar, but I wouldn’t be too surprised if Batson’s ability to use his legs causes mismatches and ends up leading Dorman to the region title. Uncertainty at the most important position, in the state’s toughest region is rarely a key to success, but I feel the Cavs strong offensive line gives them the edge in this always tough region III-5A.

–How will the new coaches fair in their first seasons?

Three teams in Spartanburg County will have new head football coaches this fall. Reggie Shaw at Byrnes, Bill Owens at Chesnee, and Lynn Fleming at Broome. Shaw appears to have the toughest task of the three as he takes over traditional powerhouse Byrnes, who went just 3-7 in Brian Lane’s final season at the helm. The Rebels won at least 10 games every year from 2001-2015, while bringing home 8 state titles during that span. The 43 year old Shaw spent the past four seasons at AC Flora, where he finished with a 29-20 record, including 6-6 last year. He is familiar with District 5 as he was a defensive backs coach under Bobby Bentley in 2006. With great facilities and the support of the community, I expect it won’t be long before the Rebels are once again competing for state supremacy. Bill Owens takes over the Chesnee football program after serving as athletic director for the last six years. Despite his time away from the field, Owens is an accomplished coach with stops at Ninety-Six, West Oak, and Union, as well as leading Broome to a state title in 2004. Eagle fans are understandably excited to have a top notch coach with a championship pedigree taking over a program that struggled to make a deep playoff run in his time as athletic director. Lynn Fleming takes over at Broome after coming over from Chesnee. Fleming has also had stops at South Florence and West Oak High School in his 13 years as a head football coach. He is a Broome graduate and looks to lead his alma mater back to glory. Which leads to my final question……

–How will Broome’s new offense look?

Last season the Centurion offense was lead by quarterback Jake Mathis and relied heavily on running back DeMarco Jackson before he went down with an injury. Exit Jet Turner and his wing-T offense, now being replaced by a spread attack under new coach Lynn Fleming. Without Jackson to lean on, the Centurions will look to have a much more balanced approach this season, with Brantley Hewitt tabbed to lead the team at quarterback. Coach Fleming is happy with the way the players have adapted to the new system in the offseason, and fans are excited to see a passing attack that has been absent from District 3 for close to a decade. I expect Broome to struggle early in the season, but still make plenty of noise when it comes time for region play.