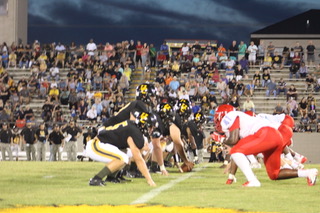 Line of the Week

When it comes to recognition on the football field, honors and awards are usually given to individual players. Often times the hardest working folks on the field get overlooked. That is why we have decided to award a Line of the Week presented by Pizza Inn. Every week we will pick and Offensive or Defensive line that had a really great game. We will recognize these guys as a unit. Honoring the hardest working guys in the game !!

The first recipient of the Line of the Week Award is the Union County Yellow Jacket Offensive Line. Union County had 490 rushing yards. With a backup quarterback in the game Union changed up their offensive formation and had three rushers over 100 yards in claiming their first win of the season.

The Jacket offensive line will have a tough test this week as they will face the Gaffney Indians.