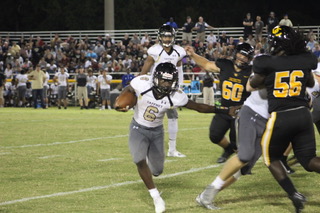 Week 3 is here and we are starting to learn more and more about each of our teams in Spartanburg County.

Boiling Springs is coming off of a loss to Chapman where they were exposed in many areas. Mistakes, penalties, and more led to the beatdown last Friday from the red hot Panthers. When the Boiling Springs offense was on, they looked very dangerous led by Aaron Thomas. The defense was on the field way too long and never got into any kind of rhythm. The road only gets tougher for the Bulldogs. This Friday, Boiling Springs will host the Silver Fox of Dutch Fork. Dutch Fork did not finish their game on Friday due to reports of gun fire at the stadium, however, the Silver Fox were already up on Irmo by 50+. Talking to a source out of Columbia on Sunday, he described this Silver Fox team as the best he has ever seen. Boiling Springs will have to turn the tables and do what Chapman did in controlling the ball and keeping the Silver Fox offense off the field. If Boiling Springs isn’t able to convert 3rd downs and keep drives alive, it will be a long night for the Bulldogs.

Dorman also has their home opener this Friday as they welcome in Bobby Carroll & the York Cougars. York traditionally has a solid team that can compete with any team in the state. The Cougars are way down this season, already 0-2 on the season with losses to Clover & Indian Land. Dorman is coming off of a win, but a game where they didn’t perform to expectation. I expect Dorman to have much more focus this week and not underestimate York. Dorman should win by 2 or 3 scores easily against this York team. The run game of the Cavaliers will be the death nail for York as they will struggle all night to stop Hillstock & Morgan. Dorman has the better coach, more talent, and will win handily.

Gaffney is at home this Friday as they host Harding University. Harding has a stud running back that is highly ranked across the nation for his entire class. Gaffney did see him last year so they are familiar with him. However, Harding has a new coach and a fairly new staff. Harding is 0-3 on the season and I believe that they will be 0-4 after this Friday. I expect Gaffney to be too much for them to handle. Gaffney’s speed on offense will cause Harding problems and Gaffney will be able to zone in on the powerful running attack and I have the Indians winning comfortably this Friday night.

In 4A, Greer goes on the road this Friday for the first time since Week 0 when they traveled to Byrnes. The Yellow Jackets came home and took care of business, now sitting at 2-1 on the season. The Greer offense has been exceptional in its last two games and the defense has been very solid as well. This week Greer goes to Mauldin. Mauldin has a very under-rated offense that could give the Greer secondary trouble. Byrnes was able to attack and damage that secondary, & Mauldin could do the same. If Greer can’t matchup with the athletic Maverick team, Greer could go to 0-2 on the season in road games. However, I think that the Greer running game and the athleticism at QB for Greer will also test the Mauldin defense. I expect this game to be somewhat high scoring, and maybe whoever has the ball last to win the game. I like Greer on the road, but not by much.

The Spartanburg Vikings & the Byrnes Rebels are both off this week so we will preview their games next week as they open up region play facing each other. Tune into the Saturday Sports Report for game recaps, interviews, and more every Saturday from 7-10am right here on the Fox Sports 1400 App or 98.3 FM.