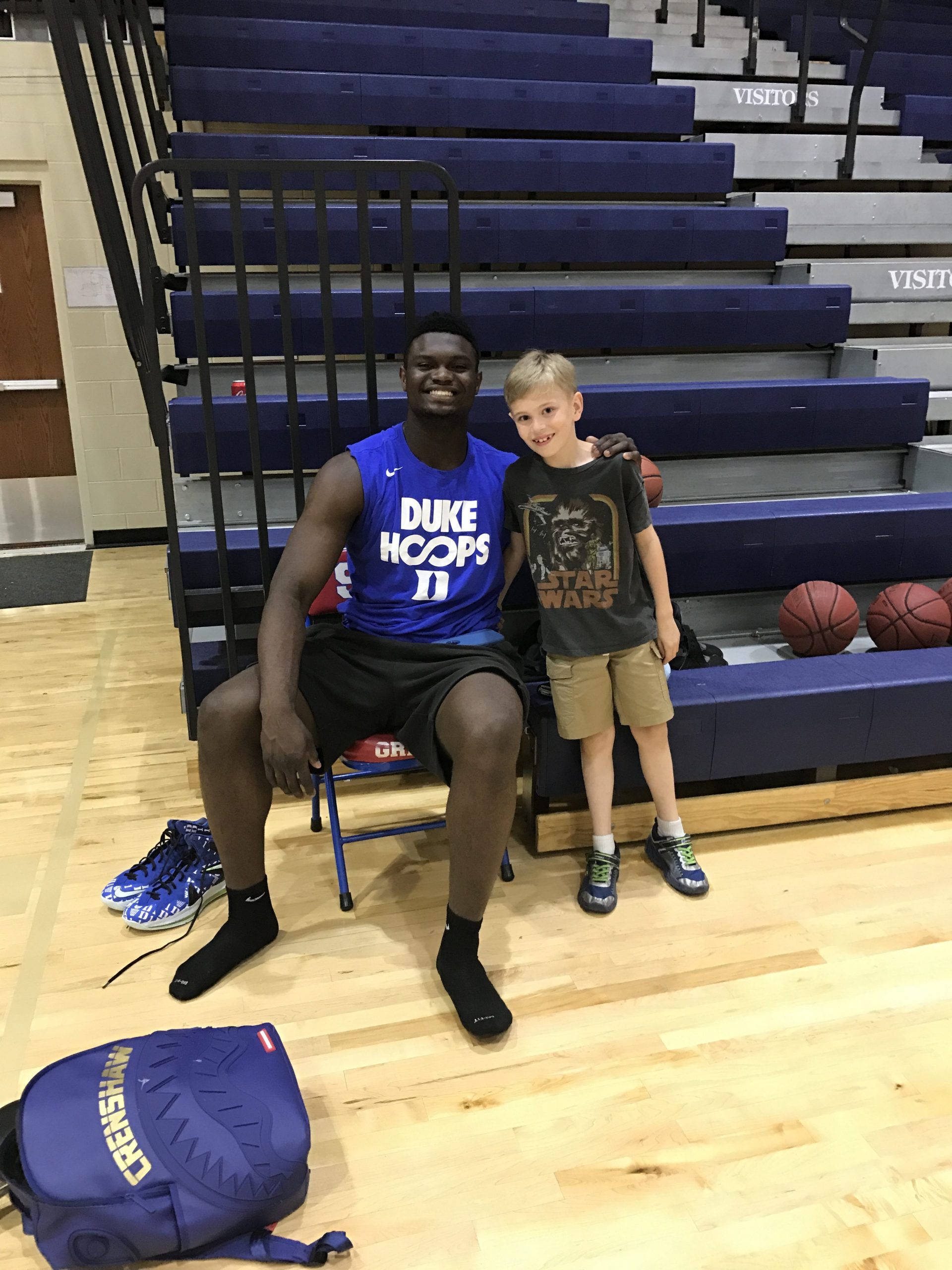 Zion. Through a Spartanburg Child’s Eyes

On Thursday, June 20th, Zion Williamson will be the number 1 pick in the 2019 NBA Draft.  The young man who calls Spartanburg South Carolina his home is preparing for the draft just like many who have come before him; going back to his roots.

Last Friday, 4 days before the 2019 draft lottery, Zion and his stepfather Lee Anderson, had a private workout at Zion’s old stomping grounds, Spartanburg Day School. My son Elliott and I were there.

Earlier that morning I received a phone call from Mr. Anderson asking me if I wanted to come interview Zion before his workout at Spartanburg Day. It’s the 4th time Zion and Mr. Anderson have been gracious enough with their incredibly busy schedule to come on our station in one form or another.

“You said something to me once,” Mr. Anderson told me on the phone. “You said the people of Spartanburg love Zion. We want everyone to know that Zion loves Spartanburg and so many who have been so supportive of him.”

“We want everyone to know just how important Spartanburg is to us” he continued. “This is our home. Zion’s home.”

Before I made my way to Spartanburg Day School, I had one stop to make.  You see my oldest son Elliott (8) and I have been Duke basketball fans our whole lives.  It was this year however where for Elliott, that fanhood took off. For myself, it was when I watched Bobby Hurley play for the first time.  For Elliott, it was watching his hero, Zion Williamson, someone he’s met a couple of times already, fly through the air opening night against Kentucky. Elliott watched every single game this season.  Some live, some taped, but he didn’t miss a minute.  He went through all the ups and downs of Zion’s year.  Celebrated when they beat Syracuse, UNC and FSU back to back to back nights to win the ACC title, and cried for 30 mins after the loss to Michigan St. Elliott was scared for Zion when he hurt his knee and imitated every single Zion dunk on his hoop on our front door.  It was the most fun, and nervous, I’ve ever been watching Duke.

I’d be the worst father ever if I didn’t bring him along this Friday afternoon.  Mr. Anderson agreed with that statement when we were shooting around that afternoon.  More on those two later.

Elliott and I arrived early so naturally we shot some hoops in a half lit gym.  Zion and Mr. Anderson arrived around 5pm and for the first time in my life, I watched my oldest son go speechless. Completely speechless.  Remember he’s met Zion before, but this was the first time he’s seen him after the season.  His hero was here. As the lights came on all around, the moment of who Elliott was with only grew.

As Zion changed his shoes and began to get ready for his workout, the best thing of the day happened as a surprise to me. Mr. Anderson was happy to see Elliott as we both have young children and usually share fun parenting stories. This day was no different.  Elliott and Noah (Zion’s younger brother) have a lot in common.

But as I got ready to interview Zion, Mr. Anderson told Elliott to come on over and let’s practice.  Elliott was so excited.  This was the man who taught his hero how to become the “very best player ever.”  Elliott sprinted down, sore ankle and all (more on that in a minute) and worked out with Zion’s personal coach.  I nearly teared up watching this as it’s just another example of how amazing Mr. Anderson and Zion are.  Man do they love kids and love the children in Spartanburg.

I spent a good 10 mins with Zion, 5 mins on the mic and another 5 just talking about his year, some common friends, my youngest son and how he pronounces Zion….Yion.

It became very clear to me how important Spartanburg is to Zion and his family.

“Sometimes you just need that small reminder of where you were before the fame” Zion said. “Just walking into Spartanburg Day’s gym, not a big gym, thinking about my 9th grade self when I first stepped on to this campus, I was wondering what was in store for me. I like to come back to Spartanburg because when nobody knew me, I was in here.”

Zion wants the people who have supported him for years to know how thankful he is.

“The people here have always been so supportive of me. Coming back home is a good reminder” Zion said.

I asked a few more questions off air about his time at Duke and Elliott comes running back to share what he had learned.  Zion looks right at him and says keep working hard my man.  Elliott then asks Zion how to treat an ankle injury.

Elliott laughed at his hero and Williamson gave him that Zion smile we’ve all seen over the past few years.

Zion high-fived his little fan and I thanked him for his time.  I spent the next 15 mins with Mr. Anderson just laughing and sharing stories as Zion came out to warm up.  As Mr. Anderson walked away for a few mins, I encouraged Elliott to stand under the goal and feed Zion the ball back as he shot.  Elliott was so nervous to be around Zion that he only got as close as the mat on the back wall.  I walked out and began to feed Zion and Elliott comes sprinting out to help.  Watching this made me tear up again.  Elliott had gone from speechless to running on the court with the young man he imitates everyday in his house.

A simple “thanks my man” from Zion and Elliott didn’t know what to do with himself. Zion has a way of making you feel very comfortable around him.

Elliott and I then sat down and watched Zion and his stepfather go through what was just another day in the life of Zion Williamson. Drill after drill, failure and success leading to perfection. Elliott watched his hero make mistakes, and be perfect all in one practice.  My son couldn’t take his eyes off the future NBA Superstar.  He’d grab a basketball and watch Zion do a drill, then try to do it on the side.  It was….sort of the same thing. Good effort Elliott.

As we said goodbye a short time later, I told Mr. Anderson and Zion they had a fan for life.  I was wrong.  Make that 5.

You see we are a family of 5 in the Clary house. What Zion and his stepfather know is that it’s about the children.  It’s why I never wondered if it was ok to bring Elliott to this workout. Those 2 incredible gentlemen have told me every time we’ve been together in the past to bring Elliott again next time we’re together.  They know that just the few minutes they each spent with Elliott has a lasting impression.  They know that coming back home to Spartanburg makes an impression on the thousands of fans he has here.  It’s their home.

Every time Zion says hi, or takes a pic with a boy or girl like my son Elliott, another family becomes fans. And that spreads to grandparents and uncles and aunts. And if it was fake, we’d all pick up on that.  But what stood out to me the most over those two hours was this: Just how real, authentic and relatable Zion really is.

His way of talking to children and making them feel like they are more important is not something you can teach. How amazing is it that for someone who does things no one around him can do, he’s the most relatable of us all. He’s caring for others and interest in what you have to say is very apparent and genuine.

He makes that clear to me in the interview.

“Live in the moment” Zion said. “Don’t think about the past or the future, just live for right now.  That’s how I’m able to have so much fun.”

Make no mistake, Zion is going to experience lots of moments: travel the world, make millions of dollars, and reach possibly and all-time level of fame.  But his home is Spartanburg South Carolina. He knows it, his family knows it, and so many like 8 year-old Elliott Clary know it. For that, Zion has fans for life.