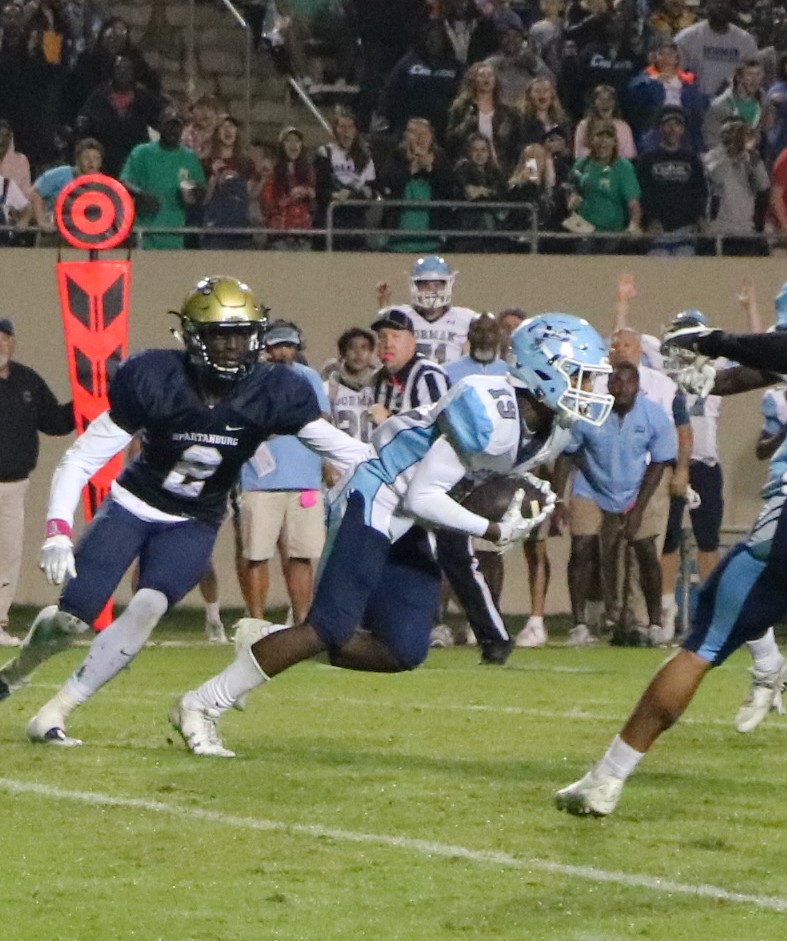 The long wait without football is finally going to come to an end, as football returns next week! With that being said let’s preview 5A and 4A schools in our area.

Class 5A region 3 never fails to disappoint as there are so many powerhouse teams. Each week every team is capable of beating one another and the region title always seems to come down to the final week.

Let’s start with the Byrnes Rebels, last year they reached all the way to Upper State Championship game but fell to a very talented TL Hanna team.

This year the Rebels bring back many key players such as there star running back Rahjai Harris, and their quarterback Lawrence Scott. The Rebels are a team that many have big expectations for this year, I expect them to compete for a region title and look for them to make another run in the playoffs.

The Gaffney Indians had a strong season a year ago with an 11-2 record and 6-1 record in the region. Due to tie-breakers, they were the third seed in the playoffs. Their season ended in the Upper State Semis as they fell to the Byrnes Rebels 27-22.

They will return their star quarterback Undre Lindsay, who as a sophomore last year showed improvements each and every week.  In his second season as their starting quarterback, he is expected to put up gaudy numbers. The Indians are viewed by many to be the best team in this region, it is a team that I see making a deep run.

The Spartanburg Vikings had a tough season a year ago, as they had some injury issues. The Vikings finished off the year at 3-8 overall and 2-5 in the region. They did receive the final playoff spot and lost in the first round to TL Hanna.

The Vikings enter this year with a new offensive coordinator Jason McManus. McManus has two quarterbacks to work with that each showed some flashes last year with having Zay Foster and Seth Smith.  As usual, look for Spartanburg to be competing for a playoffs spot.

The Dorman Cavaliers were at top of the region last year with a 6-1 record and finished the year at 11-2. They also fell to TL Hanna 35-28 in the Upper State Semis.

For the last couple of seasons, the main thing that stood out about the Cavaliers were the big offensive lineman that opened huge holes for their backs to run through. They will be replacing those guys this year so it will be interesting to see if they can still run the football as effectively as they have for the past couple of seasons. Dorman loaded with several seniors and juniors this year that all have experience, look for them to once again be in the mix to win the region. Dorman is trying to make it three years in a row.

The Boiling Springs Bulldogs had an up and down season a year ago. They finished the year at 5-6 and 4-3 inside the region. They lost in the first round of the playoffs to Northwestern by a final score of 54-35.

This season talking to coach Rick Tate, he said there will be several new players stepping into starting roles for the first time. So many of their players are still sort of unknown. He did say they will have several returned players on the defensive side of the ball. The past couple of seasons the Bulldogs have been strong on the defensive side of the ball, and that still seems to be the case this year. I don’t see them competing for a spot in the top of the region but they will be in the mix for a playoff spot.

In 4A the only team in our listening area are the Greer Yellow Jackets. Last season was a real special year for the Yellow Jackets. They were loaded with talent, and it was no surprise to see them in the State Championship. Unfortunately, they fell to Myrtle Beach 37-21.

Greer lost a lot of their key players last year, but they are still very talented. They added a quarterback Rahiem Jeter, who transferred from Byrnes High School. Greer will be in the playoffs once again this year, but I don’t see them making a run back to the state championship.

The wait for football is over! Next Friday can’t come soon enough, we are in for another great year.