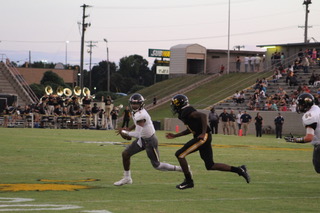 Week two of the high school football season is in the books for our area teams. In our TCB Towing Game of the Week, the Chapman Panther offense continued to roll as they beat the Boiling Springs Bulldogs, 48-0. Dante Smith had a night to remember as he rushed for over 280 yards and  three touchdowns. Mikele Colasurdo ran for a score and threw for two more in the victory.
It was quite the game in Eagle Country last night as Blue Ridge was able to hold off Chesnee in overtime, 22-21. After Rodney Alexander put the Eagles ahead in OT (21-14) on a 9 yard run, Blue Ridge got the ball, scored a touchdown and decided to go for the two point conversion and were able to convert for the win. Blue Ridge fought back after Camden Burns returned an interception for a touchdown and Jacob Kimbrell had an 11 yard touchdown run for Chesnee in the first quarter, who led 14-0.
It was all about the defense for the Broome Centurions last night as they picked off the Clinton Red Devil’s four times en route to their 49-20 victory on the road. CJ Littlejohn returned a free kick 55 yards for a score in the first before he had a 95 yard touchdown run in the fourth. Bryant Davis found the endzone three times while KJ Morgan had two touchdown runs himself in the victory for Broome.
After falling behind 18-7 in the first half, the Greer Yellow Jackets were able to storm back on the road and take down Westside, 36-28 for their first victory of the year. Raheem Jeter tossed three touchdown passes to Miller DeArmond in the win. Ben Pearson’s interception late in the fourth sealed the victory for Greer.
The Byrnes Rebels continued their early season dominance last night as they scored 24 points in the second quarter to take down Hough, 44-7. Lawerence Scott was very efficient through the air as he went 13-15 for 135 yards and had four total touchdowns while Rahjai Harris had 15 carries for 64 yards and two touchdowns. The Rebels were all over the place on special teams as they blocked four punts.
The Dorman Cavaliers had their way with Northwestern in week 2 as they ran away with a 41-14 victory. Kendall Norman returned a punt 68 yards for a score while Rashard Durrah had three rushing touchdowns for the Cavaliers.
The Gaffney Indians received a good test at home last night from Union County, but in the end the home team was able to prevail, 42-21. Je’Mari Littlejohn had two touchdowns on the ground. KeSean Glover accounted for all three of the Union County scores.
The Walhalla Razorbacks showed just how good of a team they are last night as they beat the Landrum Cardinals, 69-14. LC Williams had a terrific night at the receiver position as he had two touchdown receptions in the loss for the Cardinals.
Southside Christian went on the road and handed a very good Woodruff team their first loss of the season, 37-10. Demi Dale had a 40 yard touchdown run for the Wolverines while Noah Gaspar connected on a 33 yard field goal.
The Spartanburg Vikings were able to strike first against a solid all around Archer, Georgia team last night on a Zay Foster run, but Archer got their offense rolling as the Tigers went on win, 49-10.