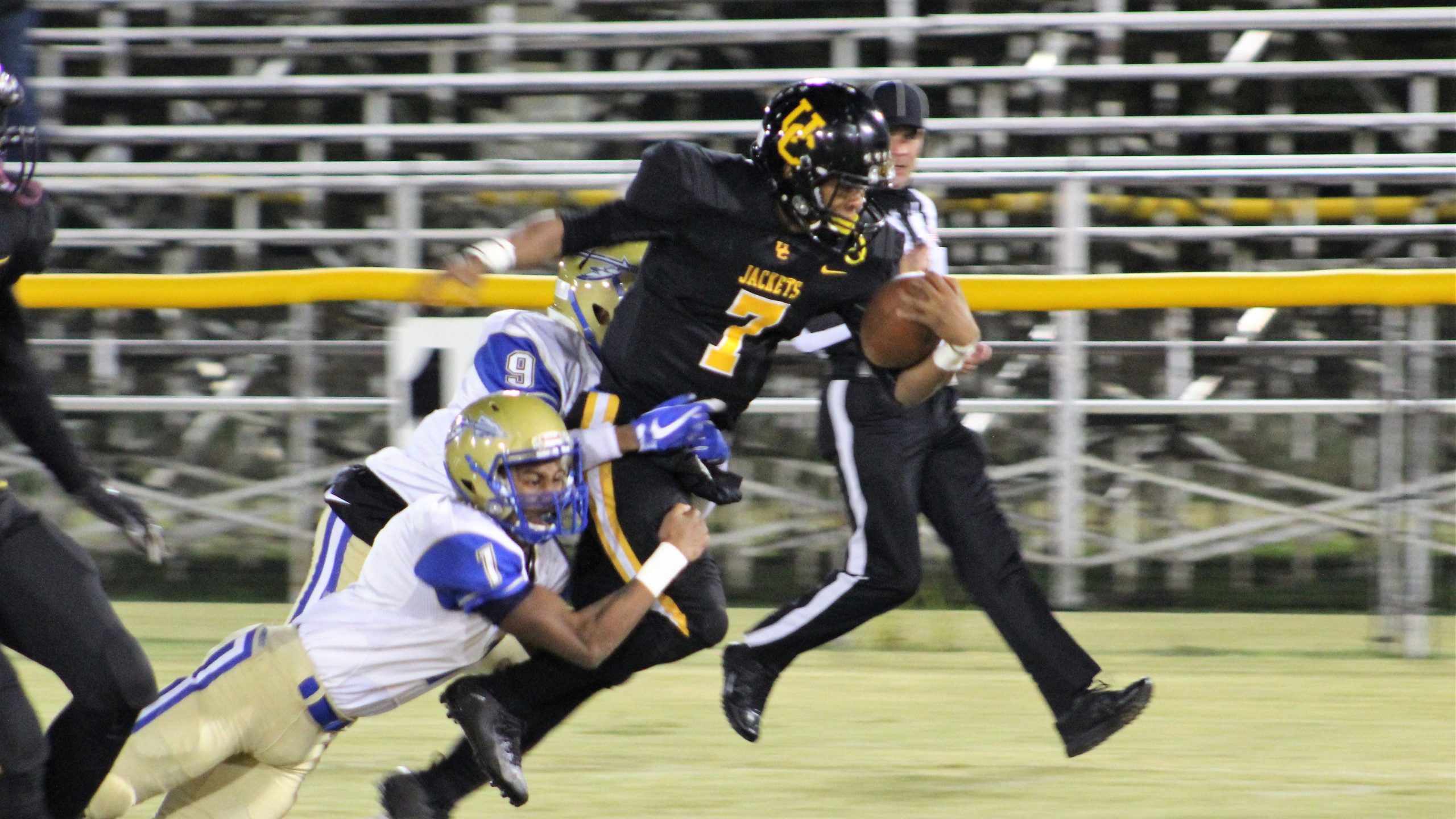 Week 9 is in the books for High School Football in the Upstate. In our TCB Towing Game of the Week, Gaffney quarterback Undre Lindsay had a huge performance against a good Boiling Springs defense as he went 18-23 through the air for 284 yards and four touchdowns in the first half as the Indians beat the Bulldogs, 56-13.
The Spartanburg Vikings were able to start fast at Riverside and never looked back, as the Vikings prevailed 62-7. Six different Spartanburg players found the endzone in the first half, including Jaden Simmons, who returned a block punt for a score. Spartanburg will close out the regular season at home next Friday against Gaffney.
After a bye week, the Chapman Panthers weren’t to rusty offensively as they were able to beat Southside, 69-20. Quarterback Mikele Colasurdo went 12-15 passing for 181 yards and three touchdowns while he carried the ball six times for 61 yards.
The Union County Yellow Jackets were victorious in their homecoming game as they were able to hold off Newberry, 28-21. Jaylon Edwards had a big game defensively as he came away with a pick six for Union in the first half, and also recovered a fumble inside the Jacket five yard line. Quarterback K’Sean Glover threw for 232 yards and two scores while Junior Owens ran for 106 yards in the win.
The Woodruff Wolverines got a scare from Mid Carolina on the road as Woodruff was able to escape with a 28-24 win. Woodruff was down 24-21 with less than five minutes to play before BJ Bailey threw a touchdown pass to Zy Scott with a little more than three minutes remaining to put the Wolverines ahead for good.
The Byrnes Rebels were able to get back to their winning ways last night as they beat Hillcrest, 46-23. Lawerence Scott and Rahjai Harris had big nights for Byrnes as Scott threw for two scores and Harris found the endzone twice for the Rebels, who now turn their attention to Boiling Springs for week 10.
The Dorman Cavaliers made quick work of Mauldin in week 9 as Dorman won, 55-7. With the victory, the Cavaliers officially clinched the Region 2, 5A Championship. Dorman got their offense going early as they raced out to a 41-0 halftime lead. Ty Lindsay, Zion Lindsey, Chance Black and Hayden Lee were all very productive offensively in the win for the Cavaliers.
It was another rough loss for the Landrum Cardinals this week, as their comeback attempt fell short at Blacksburg, 42-36. Jeff Martin led Blacksburg offensively as he found the endzone four times. Cardinals quarterback Cooper Gentry threw for two touchdowns and ran a couple more in himself.
Incase you missed the games from Thursday, Broome beat Carolina, 54-16. KJ Morgan had a big night with 4 catches that went for 82 yards and four touchdowns.
The Greer Yellow Jackets gave Eastside all they could handle, but Greer fell just short at home on Thursday, 35-28.