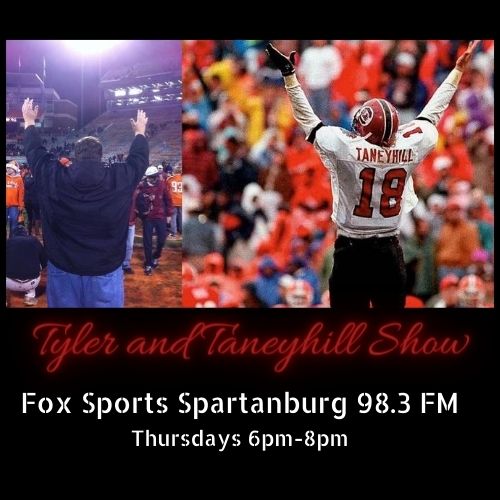 Fox Sports 1400 and 98.3FM is very excited to announce the launching of the Tyler and Taneyhill Show, Thursday nights from 6-8pm.  Former Gamecock Quarterback Steve Taneyhill will bring his thoughts on college football, the NFL, and anything else in the world of sports every week with co-host Tyler Shugart, host of Bump & Run and the Friday Night Tailgate Show.

“Hosting a show alongside a legend like Steve is a dream come true for me.  When I sat in the stands at Williams-Brice in 1994 as an 8 year old boy I would have never imagined that I would host a show with the guy I was watching throw touchdowns.  I cannot wait to talk football with Steve Taneyhill each and every Thursday,” said Shugart.

While at USC, Taneyhill threw for 8555 and 61 Touchdowns, but it was his demeanor and energy on and off the field that helped him to become one of the most popular players in Gamecock Football history.

You can hear Tyler and Taneyhill in Spartanburg on 98.3FM, 1400AM, and worldwide on the Fox Sports 1400 App and on spartanburgsportsradio.com.  The first show will be Thursday September 10th.