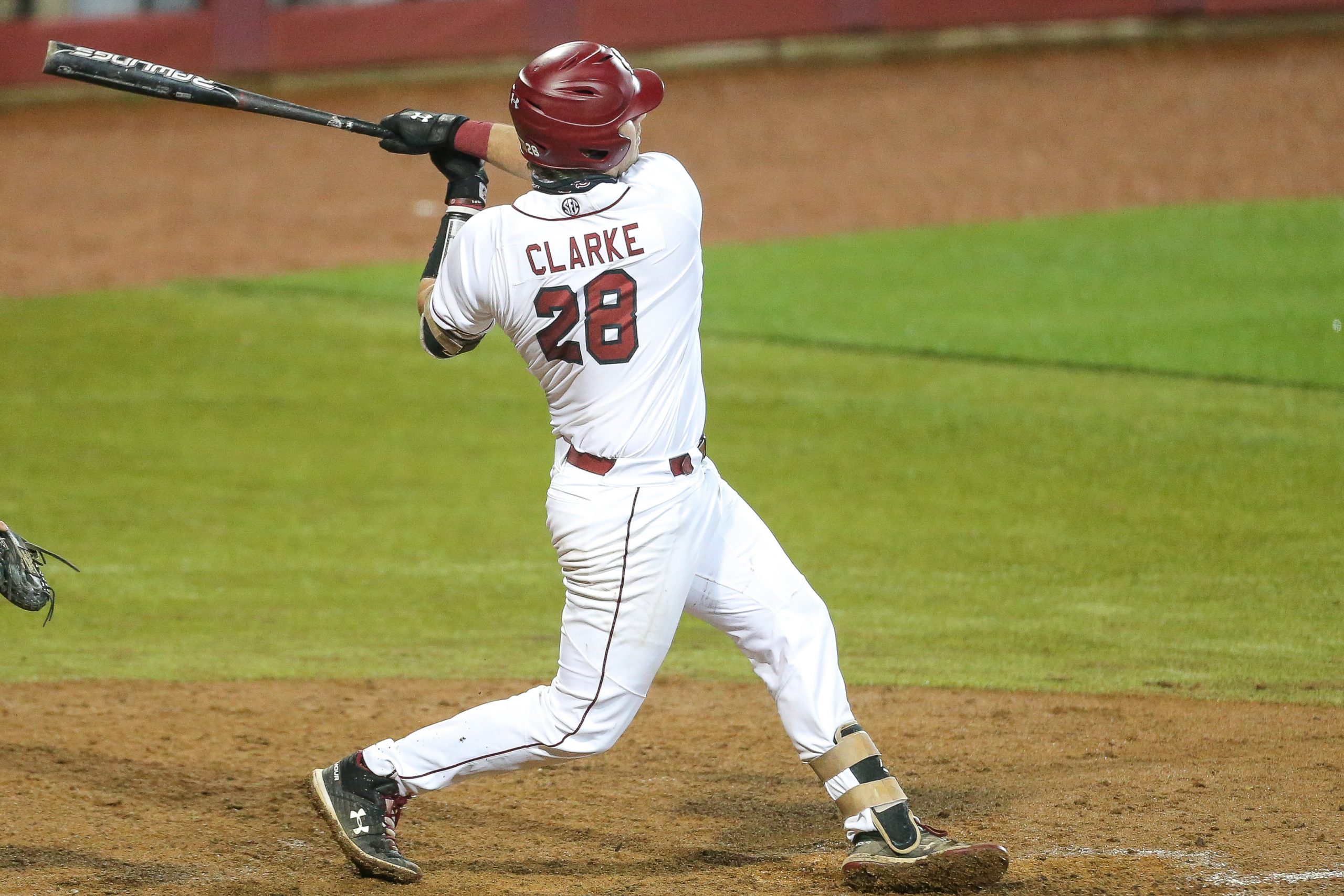 Well, I had intentions on writing a lot about high school baseball this week. But, God had other plans since the first week of the regular season was washed out. That is ok because that gives me an opportunity to address the elephant in the room. South Carolina lost a few games and now there’s panic among fans.

The Gamecocks have lost 4 in a row after their 11-0 start to the season, having been swept by #10 Texas last weekend and losing to Davidson in midweek action Wednesday. The offense that was so potent over the first 11 games was held to just 10 runs over the last 4.

The Gamecocks’ bullpen, which had been dominant, gave up 13 earned runs and walked 14 batters (partly due to the fact Davidson was a bullpen game, but that’s still not good).

There were a few decisions by Skylar Meade that some would question such as not pitching Brett Kerry in the 8th inning of the Friday game at Texas or going with a bullpen game vs Davidson (neither was a bad call. Waste your closer to hold a tied game or save him for when you might need him in a close game later in the series? Waste a good bullpen arm you’ll need for Vandy for a full start in midweek or let the back end guys and freshmen get some innings in against an opponent your offense was good enough to beat?)

Wes Clarke only hit 2 bombs in the last 4 games (total sarcasm there..).

To the fans’ defense, it looks bleak with the offense struggling and the best pitching staff in the country coming up this weekend at Vanderbilt.

But, is it time to hit the panic button for the Gamecocks? I say no. It’s still too early. Here’s why. Let’s start with the Texas series. Even though Carolina got swept, these were 3 really close games. The reality is that this Texas series was not about winning or losing. It was added to the schedule as an RPI booster and a test. This was a series where the best you could hope for was to win 1 if you could and be competitive. That is exactly what happened.

The first 2 games of the series were very well pitched. Thomas Farr continued to show why he is a true Friday starter, as he battled through getting knocked around a bit to be the first Gamecock starter to give a little bit of longevity. He went 6 innings, and even though he gave up 7 hits, he struck out 10, walked only 1, & surrendered only 1 run. In game 2, Brannon Jordan pitched his way out of a couple of big jams with clutch strikeouts. He amassed 6 of them vs only 2 walks and 3 hits in 5 innings, yielding only 2 solo homers in his final inning. Pitching really is not a concern. They will keep the Gamecocks in games.

The defense also turned in a few nice web gems and erased some runners in Austin, as Colin Burgess threw out 2 would be stealers on Friday, Wes Clarke threw out a runner on Sunday, Braylen Wimmer robbed an extra base hit deep in the gap in center that would have scored a run on Sunday, and Andrew Eyster made a perfect throw to save a run by gunning out a runner at the plate on a flyout throw out double play in the Friday game. Pitching and defense are a big part of winning. But, they’re nothing without clutch hits. That is what truly wins championships. You have to add clutch hitting into the mix and that is one of the areas the Gamecocks failed at in Texas.

Here is where the concern lies. South Carolina certainly was not without their golden chances to do damage, both against Texas and Davidson. Dating back to the Mercer series, the Gamecocks had left 71 men on base. That is not a recipe for success when your offense isn’t producing against mid majors. It is really not helpful against the likes of Kumar Rocker, who Carolina will face tonight. There are going to be stretches where the bats will be cold. That is baseball. Those stretches seem extra rough when your team relies on power and big extra base knocks. I really don’t think that it is the biggest issue going forward. They’ll have their slumps, peaks, and valleys as a team, but they are capable of turning it around. Certainly where we stand right now, the Gamecocks will have to get better at clutch hitting. Meaning Wes Clarke and Andrew Eyster will have to break out of their slumps ASAP. It would also be great to get Brennan Milone going.

Another area that I am not highly concerned about, but given our present problems, needs to improve is the bullpen. The bullpen had been absolutely dominant prior to the Texas series. Being as young as they are, they were due to take a few lumps. So, in all honesty, that is the good thing about the Texas series being more about examining where we stand vs being about winning. This series, as much as you don’t like it as a fan, was the perfect opportunity to go ahead and get humbled and get your pitching slump out of the way. Can they afford any more hiccups going forward? No, but I honestly think that like the bats, the bullpen will have their ups & downs. They are capable of turning it around, and there’s no reason to panic based off their struggles this week just yet.

The only real problems that absolutely have to get better, besides the clutch hitting, are strikeouts, walks, and errors. The Gamecock offense is averaging 8.4 K’s per game, which is, clearly, not going to translate to success against the caliber of pitching Carolina will face these next 2 weekends. Pitchingwise, one thing that will help them is to cut down on walks. The last 4 games alone, they have issued 21 free passes. On the season, they have averaged 4 per game, amassing well over 50 through 15 games. Walks, especially leadoff walks will almost always come back to bite you, which was the case in the loss to Davidson wednesday night. Lastly, the one thing that will bite harder than walks is errors.

The defense may have had their share of web gems against Texas, but it is hard to overlook what ultimately made the difference in game 3 of that series. 3 errors that resulted in 2 unearned runs. They also made 1 error against Davidson that resulted in 2 free runs. The Gamecocks have had at least 1 fielding miscue in about half of their games so far. Free passes and 2nd chances are never ideal. But, when you have the schedule from hades, you really are under pressure to play cleanly. An error here or there won’t hurt. They happen. But, that doesn’t justify the number of them made so far.

Ultimately, there is still plenty of time to get the bats going, the pitching is fine save for the walks, and there is ample time to shore up the defense. The great thing about the Gamecocks 11-0 start is that they built up a nice cushion. We have a rough patch coming up. Yes, they got swept by Texas and that is not ideal. But, they have shown that they are a good enough team to where if they take care of business in midweek (yes, they didn’t do that this week. But you cannot overreact to one midweek loss. They happen), and so long as they at least avoid getting swept in conference play, they can still be a tournament team. For sure they are a bubble team. So is it time to panic? No. Pump the brakes on it and let’s see where we stand in 2 weeks. We will know better what they are by then.