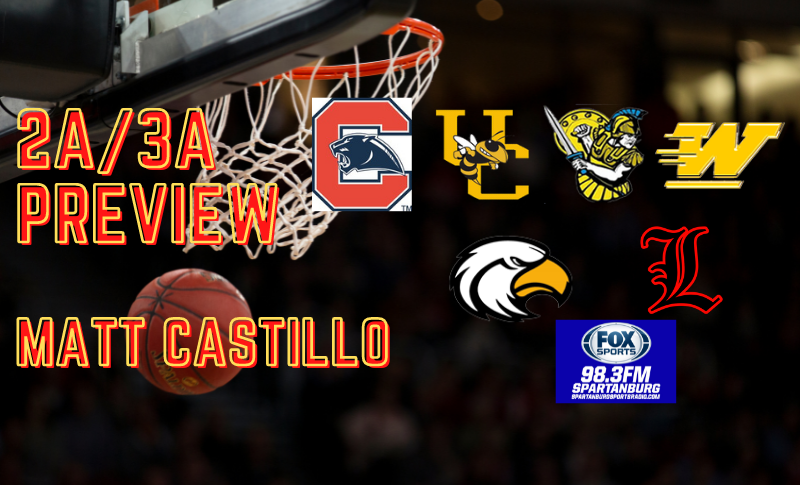 Football season is near its end and that means it will be time for the high school basketball season. Some of the teams have already begun their season but it is still a great time to preview the 2A/3A teams in our local listening area.

The Chesnee Eagles finished last year with an 8-7 record and were 4-6 inside their region and missed out in the playoffs but a part of that was the covid rules where only the top two teams in each region made the playoffs.

This year the Eagles look to bounce back and make some noise in the 2A classification. The Eagles are bringing back some experience this year with guys like Jalen Rudisill, K’Jymie Valentine, Ty Dawkins, and Elijah Wease. They also have a talented Sophomore Brady Poole who had 31 pts in their season-opening loss to Southside Christian.

My outlook for this Eagle team is they will finish 3rd or 4th in their region but like always when you face the Eagles they are going to give their best effort and come out ready to play.

The Landrum Cardinals are the reigning region champs from a year ago they fell in the quarterfinals to Christ Church who went on to win the state championship. But the Cardinals will look to make another run at it this year.

The Cardinals are returning several key guys from last year such as and are very experienced as they have 7 seniors on the roster.

They also have 2 returning juniors on the roster as well so with the experienced bunch led by Coach Smith who continues to do an excellent job for the Cardinals program I expect this team to be in the mix for the region title and another playoff run.

The Union County Yellow Jackets didn’t have the season that many expected them to have a year ago as they finished the year 7-10 and 5-5 in the region and miss the playoffs. With the combination of size and athleticism, I saw this Union team as a team that could make a big run but it just didn’t happen.

The Yellow Jackets will look to get back on a winning track and make the playoffs this year. The Yellow Jackets did lose their 6ft9 Center Timothy Salters to Legion Collegiate but still have plenty of athletic guys on their roster like JaBryson Hunter.

I look for the Yellow Jackets to be in this playoff this season despite losing some size I think Union will have a solid year and bounce back from last season.

The Broome Centurions finished the year at 8-11 and 4-6 in region play and missed out on the playoffs. The Centurions took care of business at home winning record at 6-4 but really struggled when they are on the road as they were just 1-6 on the year.

The Centurions do have some experience on the roster this year and have an all-around athlete with Dylan Ramierez on the floor and have a few other seniors.

I look for the Centurions to be much more competitive this year and compete for a playoff spot.

The Wolverines had a strong year a season ago as they had a 16-6 and finished 7-3 in the region that was good for second place. Woodruff made it to the quartefinal round but fell to Keenan 64-48.

The Wolverines will look to build off that great season and repeat it once again and perhaps secure region title that they have flirted with the past couple of seasons.

The Wolverines lost 4 seniors from a year ago and do have a younger team so it will be interesting to see how they look this year. Teams in the region I believe have gotten better but I do beleive to see the Wolverines in the playoffs.

The Chapman Panthers were 15-8 and 8-2 inside the region which was good enough to win the region title.

The Panthers lost to Blue Ridge 70-54 in the playoffs, but the Panthers are looking to make a deeper run this year.

The Panthers have several players back from a year ago like Bank Atkins and DJ black, I look for the Panthers to be in  the mix to repeat as champs this year.

This region is a competitive region and always one that is a lot of fun to follow and that will ne the case again this year!

Round Two Recap
4A/ 5A Basketball Preview