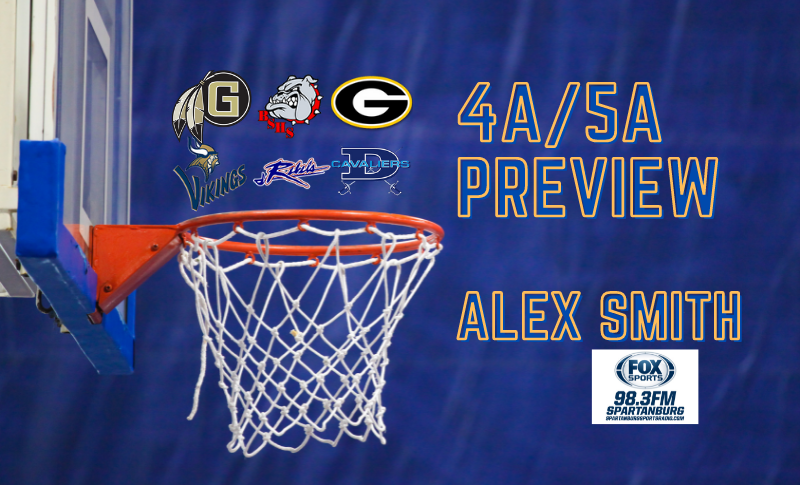 4A/ 5A Basketball Preview

Basketball season is underway. Here is a look at what to expect in 4A and 5A.

I’ll start in Region II-5A where the Dorman Cavaliers are once again the favorite. Coach Thomas Ryan’s team returns a couple of key players down low, but will also have several new players in backcourt positions as well. Alabama commit Noah Clowney will control the paint for the Cavs, and USC-Upstate commit Jordyn Surratt will provide length on the defensive perimeter. The question for Dorman is at the point guard position. Jalen Breazeale has moved on to the next level, so it’ll be interesting to see how well they can replace their primary ball handler. Jordan Miller got some minutes on varsity last season and is excellent on the defensive end, but he will need to improve his decision making on offense if he wants to add his name to the list of star guards that have donned the Cavalier uniform in recent years.

The Byrnes Rebels will also have high expectations this year, despite losing four seniors from last year’s squad. Thomas Gregory and Will Fowler will most likely carry the bulk of the offensive load for the Rebels, and Coach Fowler has some questions outside of those two. Byrnes doesn’t have a ton of height this year, but they are normally a disciplined defensive team who can also shoot the ball well from the outside. Look for Byrnes to challenge the Cavs for region supremacy.

The Spartanburg Vikings will have a young team this year but should be battling for a playoff spot. Coach Ford has his program moving in the right direction and I expect the Vikings to be a team that shows a ton of improvement throughout the season. Without a ton of height and length, I think Spartanburg will rely on their athleticism and defensive effort to win games this year.

In Region III-5A, Coach Philip McHam and the Gaffney Indians will try and make it back to back region titles. It won’t be easy as Clover might be the favorite heading into the year. The Indians will need several new guys to step up this season, and they will lean heavily on the ability to score from the outside as they are another team that is a bit undersized in the frontcourt. Also, in Region III, Coach Curtis Nash will begin his second season in charge of the Boiling Springs Bulldogs. The Bulldogs finished just under .500 last season and will be looking to improve after several young players got big minutes in 2020. This region is pretty stacked, but I like the Bulldogs to be in the hunt for a playoff spot this year.

In Region II-4A Greer will once again be expected to challenge for a region title. Last season they finished second in the region before a playoff loss to South Pointe ended their year. This region will be very competitive, with Greenville as the team to beat. The Red Raiders are ranked second in the state in the 4A preseason poll and are a deep and talented team. The Yellow Jackets will be challenged with a difficult schedule early, which will hopefully prepare them for the latter part of the season.