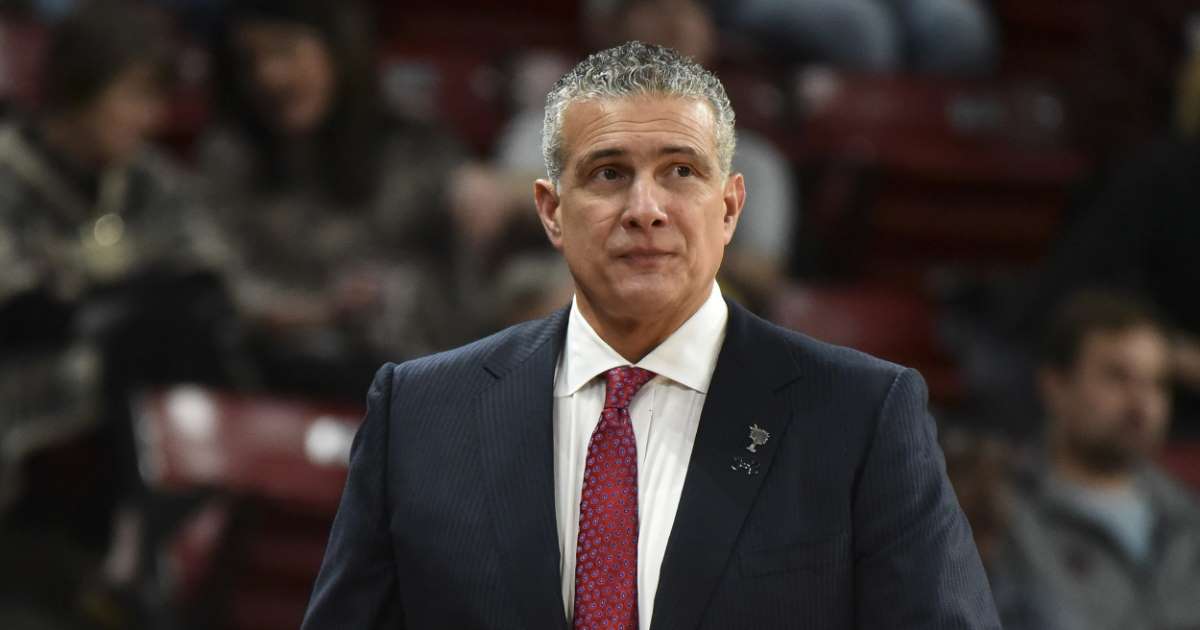 Let’s be Frank, or Not

Last week, I gave the Gamecocks a midseason grade of B-, stating they are just above average, meeting expectations while showing they have plenty to improve on. In just a week, that hint of positivity and hopeful optimism has taken a turn, but not necessarily for the worst. After the last 2 games, it is clear that old problems and habits do die hard and that there are definitely a lot of problems that will need to be fixed if they want to be a tournament-worthy team.

The thing that was impressing me up to the halfway point was that Frank Martin was being a little less extreme with his disciplinary measures and that the team has not been having as many disappointments as we have seen in years past. It really seemed as if the Gamecocks could avoid more major injuries and covid issues and shore up their shooting and turnover problems, that they could easily at least be a sure contender to make the NIT. But, right now, that is less sure and more of a possibility with the way things are going right now.

In the last 2 games – in which they have gone 0-2 to drop their SEC record to a dismal 1-4 (10-7 overall), the Gamecocks have had their problems come to light. They have shot a meager 34.3% from the field (46-134) combined against Florida and Arkansas, including a horrible 2nd half against the Razorbacks in which South Carolina only scored 19 points, going 6-27 from the field (22%) and just 1 for 10 from 3 point range. Devin Carter and James Reese carried the Gamecocks as the only 2 in double figures. Carter had 20 points in his first career start for the Gamecocks while Reese tallied 10 points.

Against Florida, Carolina shot a total of 34.7% from the field (just 26 of 75), and went 8-22 from downtown (with most of those 8 makes coming in the final minutes of the 2nd half). The Gamecocks had just 2 players in double figures – Erik Stevenson and Chico Carter, who combined for 22 points. Keyshawn Bryant and Jermaine Couisnard each had 4 points and Wildens Leveque scored just 7 points in only 16 minutes (he was in foul trouble with 4).

Credit where it is due to Florida. They played great defense, blocking 11 shots (8 of them by Colin Castleton), and they kept South Carolina from being able to get inside and drive the ball to the hoop. But, not all the credit can or should go to the Gators. Not to overstate the obvious, but simply put, Florida was getting their shots to fall and South Carolina wasn’t, even when the Gamecocks were able to get good looks.

Aside from not shooting very well, USC also has struggled with turning the ball over. Against Tennessee and Vanderbilt, Carolina turned the ball over 20+ times in both games, resulting in nearly 40 points for the opposition. They did manage to shore that up some this week, but that’s more likely due to the fact that they just could not shoot the ball. Against Florida and Arkansas, they combined for 27 turnovers, surrendering 29 points off them. South Carolina has been averaging right at 16 turnovers per game this season so far.

But, quite possibly the most alarming thing that has gone awry this past week for USC is that Frank Martin has gone back to his “old ways” (not to say he ever really left them). It is no secret that Frank’s coaching style, which can only loosely be described as tough love, has been the subject of some controversy. Whether it be benching his best shooter at a crucial point in a crucial game to teach him a lesson about attitude, screaming and yelling until he is cartoonishly red in the face with smoke coming out of his ears, to almost getting into physical altercations with players that upset him, Frank has been known to be an unconventional disciplinarian. He is no Bob Knight, but you cannot argue that his style has that influence. Your opinion on whether or not players are too soft these days or whether or not they knew what they were signing up for when they agreed to play for him is irrelevant here. Bottom line is that that type of coaching just does not work these days. Just like trying to build a program organically in college football (I.E. without using the transfer portal to your advantage) does not help.

I don’t think players want to be, nor should they be, coddled. But, it just goes without saying that benching your best player(s) as a teaching point when you are in need of a win and have not made the tournament but once in 8.5 years, isn’t smart coaching. It also doesn’t take a genius to figure out that when you are struggling with confidence (which is undoubtedly a part of South Carolina’s shooting woes of late), getting screamed at by a red-faced Bond villain doesn’t help rebuild it.

This past week, Frank went back to using the bench as a motivator/teaching tool against Arkansas, when he opted not to start Jermaine Couisnard and AJ Wilson. When asked why he went that route, Martin said “I put guys out on the court that are physically and mentally prepared to go and help us win. That is what I have always done and will continue to do.” Essentially, he was saying he benched them because they need to get to a place mentally where they are able to do as they are being asked. AJ and Jermaine do carry a lot of weight on their shoulders, and they both have had their struggles over the last 2 weeks, with a combined 20 points between them over the last 3 games they have played in. But, basketball is not like football.

In football, you have a week between games to get your confidence back up in practice. Basketball is a lot like baseball. You play 2-3 times per week, and really, when you are struggling with confidence or dealing with pressure getting you into a mental funk, the only way to get over it is to play through it. Does that mean drag the whole team down by being a starter? No. In baseball, you’d be moved to the bench or down the lineup card. In this case, it would have benefitted AJ and Jermaine to be made bench players for a couple of games or to just be sat out of a game in which Carolina had no shot. Instead, Frank opted to just totally bench them. They didn’t play a single second against Arkansas in a game that South Carolina had a puncher’s chance in.

Realistically, that is not the reason they lost, and to say such would be beyond idiotic. But, to say it wasn’t a factor at all would also be ignorant. Especially in not having Jermaine Couisnard out there. Even when he is shooting poorly, he is still a boost defensively and helps team morale.

One cannot ignore the other glaringly obvious problem with Frank Martin – recruiting. Frank has done a very good job of using the transfer portal to his advantage. His main issue is just the opposite. He cannot bring in developable talent. Over the last 3 years, Frank has consistently had just 2-3 players returning. It is difficult to build team chemistry when you have no established core of players year in and out. The last true core South Carolina had was when Sindarius Thornwell, Maik Kotsar, Chris Silva, Duane Notice, and PJ Dozier helped lead Frank to the Final 4. Speaking of final 4, how do you not manage to recruit off of that? Frank did not capitalize on it, has not been able to recruit within the state of South Carolina well, and he has relied too much on the portal to carry him. That just simply is not something that will help sustain success.

South Carolina is 5 years removed from having been in the NCAA final 4 and right now we are just hoping they make the NIT. That is a problem, and it is one that can only be solved by either Frank Martin changing his ways or South Carolina biting the bullet and parting ways with him. If one or the other does not give, the Gamecock basketball program will only continue to be stuck.

Right now, in order to be on the NCAA tournament bubble, the Gamecocks will have to win 9 or more SEC games. That is a tough task seeing as the remaining schedule does not really relent. Carolina faces Auburn, Tennessee, Alabama, Kentucky, Mississippi State (twice), and UGA (twice). Those are all pretty good teams. They also face Vanderbilt again, as well as Missouri, Ole Miss, and LSU.

Something has got to give real quick for the Gamecocks to get this season turned around. They will have their first crack at turning the tide Saturday as they host Georgia at 3:30. They’ll follow that up Wednesday night with Vanderbilt at Colonial Life Arena with tipoff set for 7:00.