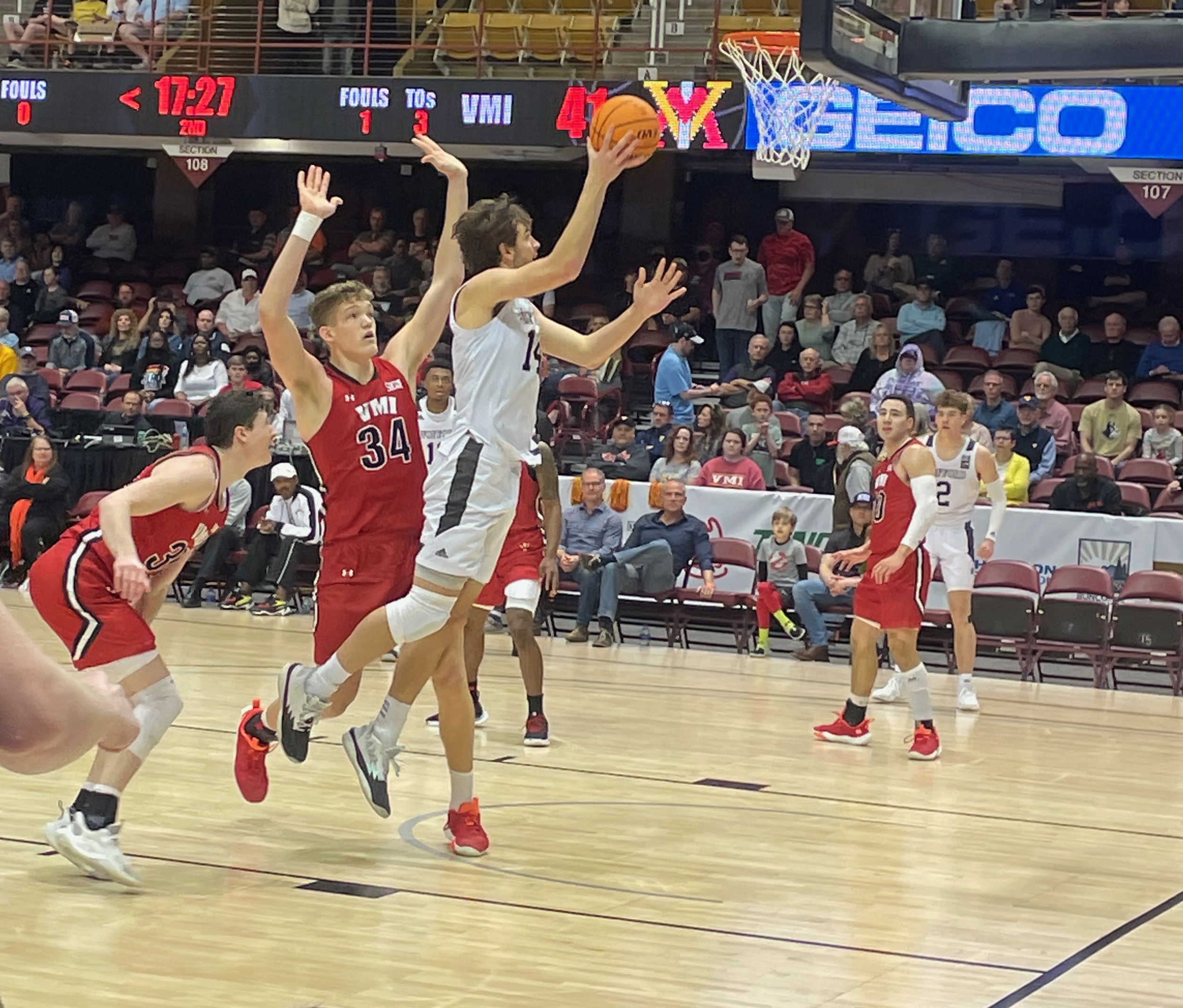 The #4- seeded Wofford Terriers took on a familiar foe in the Virginia Military Institute Keydets in the Southern Conference Tournament semifinals. The Terriers split the regular season series with the Keydets with an 80-73 loss back on December 29th and an 83-72 win just 2 weeks ago on February 23rd. Both meetings were intense and physical, and this time was definitely no exception. It’s March, so insert March Madness cliches like “Win or go home” or “survive and advance” or maybe a Wofford spin on it, “Conquer and Prevail.” The stakes are higher. So, you had to expect these teams were going to fight and fight hard. Someone was going to have to step up and execute and something was going to have to bounce your way to win. Both of those things fell into place for the Terriers on Saturday night.

In the first half, Wofford struggled to defend, thanks a lot to the story of the game for VMI – center Jake Stephens. He gave the Terriers fits all night long with his size and ability to score from anywhere on the floor. He scored the game’s first 5 points for VMI and went on to score 10 in the first half. In the 2nd half, he scored 13 more to lead the Keydets with 23 points, going 5 of 11 in the paint and 7 for 18 from 3 pt range with 3 rebounds and 3 assists. VMI outshot the Terriers all game long, shooting 46% from the floor and 42% from distance. The difference in the game came from rebounds and turnovers.

Wofford outrebounded the Keydets 36-30, but contrary to the Terriers’ trends for the season, most of those were offensive boards. They had 10 offensive rebounds to VMI’s 3 for 7 2nd chance points. Another key difference maker was the 9 steals Wofford came up with (11 overall forced turnovers). One of those steals set up what would be the game-winning play for Wofford.

Austin Patterson came up with a huge steal with 17 seconds to play in the game with Wofford trailing 66-65. With 7 seconds to play, Max Klesmit drove the lane and put up a layup, and drew a foul as he went up to have a shot at a 3 point play to give the Terriers the lead. He drained the freethrow to make it  68-66 with 7 seconds to play. The came the controversial ending (because it is a tournament game. Why not?).

VMI went right down the court in transition. Wofford was able to guard the perimeter well and forced them to have to try and tie it with a contested jumpshot inside as the buzzer sounded. The ball went off his fingertips right as the red light on the backboard came on, and the shot initially hit the front iron and bounced up. But on the ricochet, it came back down and went in right as the buzzer stopped, prompting a review. It was determined that since the ball left his hand after the light came on and because the light went off as it bounced in that the shot did not count, and thus, Wofford was able to hang on for a last second 68-66 win to advance to the semifinals.

As far as who stepped up for the Terriers, they were led  by a big game from guard Morgan Safford, who finished with 17 points, and 7 rebounds, including going 3 of 5 from three point range. Max Klesmit, besides the game winning 3 point play, had 15 points, going 6 for 11 in the paint (which is intriguing for him since he tends to be more of a 3 point shooter). BJ Mack logged yet another double double for his 5th of the season with 15 points and 10 rebounds. This marks the 28th time this season BJ has finished in double figures.

Head Coach Jay McAuley was pleased with the effort and gave high praise to VMI. “First off, Jake Stephens. Wow. That guy and their outfit at VMI, heck of a team. Well-coached. Really tough. We just made enough plays to get out of there. A lot of respect to them. They fought their tails off. That is what March is all about. Two teams that are tough and smart going at each other. We beat a really good basketball team. I’m very proud of our team. The little things added up throughout the course of the game and number 13 (Morgan Safford) had his share of the little things. That ended up being the difference. I’m really proud that we are moving on.”

With the win, Wofford will advancd to the semifinals to take on the #1 seed Chattanooga.

The Terriers had an 0-3 record against Chattanooga coming into today’s Southern Conference tournament semifinals. The Terriers fell 76-67 in their first matchup and 71-60 in the 2nd meeting between the two. With a chance to play for the conference tournament and go to the Big Dance, no doubt Wofford was looking to go for broke to break the trend and get the upset. History was on their side, with Wofford holding a 2-1 all time record over the Mocs in the SoCon Tournament. But, to get another win today would not be an easy task.

Chattanooga has been the #1 team in the SoCon all season and they won the regular season championship with ease. That is in large part due to just how big they are. They have 2 guards in Sophomore and 2022 SoCon player of the year Malachi Smith and 2nd team all-SoCon Grad student David Jean-Baptiste. The 6’ 4” 205 lb Smith averages 20 points per game, was shooting 50% from the field and 41% from three point range on the season coming in. Jean-Baptiste (6 foot 1, 193 pounds) was averaging 15 points per game, shooting with a season shooting percentage of 42% from the floor and 38% from three (don’t let that 3 percentage fool you. He takes a lot of shots from downtown, and naturally that means the numbers will be lower. He is UTC’s all time leader in 3’s with over 240).

But, those 2 aren’t all the weapons the Mocs have at their disposal. They also have 6’ 9” graduate forward Silvio DeSousa, who was shooting 56.5% from the field coming in and with his size, is basically a tree. They have another 6’ 6” forward in senior Darius Banks. He doesn’t score a lot, but is still an imposing threat very similar to Isaiah Bigelow and BJ Mack for Wofford, averaging 5 rebounds per game and 3 assists per game.

Basically, Chattanooga has an automatic size and athleticism advantage on almost any opponent they face both offensively and defensively in the paint, and that is a big reason why the Mocs are 25-7. Chattanooga head coach Lamont Paris had this to say about his big interior bodies: “It’s a different body on you every time. One guy you are going to have to use quickness against. Another guy you’re gonna have to try to pound it in against. Another guy is gonna have to force them to the left. Besides how taxing it is on them physically, and also mentally, trying to throw double teams in and out to keep them guessing. To have 3 or more bodies that can do that is valuable to our team defensively as anything else that we do.”

The way the game played out showed that Chattanooga did their homework. It is no secret that Wofford’s offense relies heavily on the 3 with such talented shooters as Ryan Larson, Max Klesmit, Morgan Safford, and Austin Patterson. Their MO is to make big 3s, but also play physical and aggressive defense, particularly inside. Chattanooga basically beat Wofford at their own game by making Wofford play their game. Chattanooga limited Wofford’s 3 point shooters from being able to even get good enough looks to try threes. They also used their arsenal of big bodies in the paint to keep BJ Mack and Isaiah Bigelow from being able to get to the rim.

Wofford got off to a very slow start, not scoring their first points until the 16:58 mark in the half. But, they were able to chip away and keep pace with the Mocs, not trailing by more than 6 up until the final 5 minutes. Wofford turned the ball over 3 times in that span and missed 3 shots to allow the Mocs to open up a 12 point advantage on them that would only keep growing.

The Terriers were held to 2 of 9 from distance in the first half, and just 8 for 22 in the paint with 8 turnovers. On the flip side, Chattanooga shot over 60% from both the field as well as from beyond the arch. In short, Wofford was absolutely dominated, and got into a hole too big too hole to realistically get out of in the latter minutes of the 1st half. The 2nd half fired a bit better for the Terriers as they shot 54% from the field (14-26) and 50% from downtown (4 for 8). They were finally able to find a little success driving to the rim and were able to open it up more for their inside game by finally hitting on some threes. But, they still had no answer for the duo of Malachi Smith and David Jean-Baptiste, who combined for 22 points in the 2nd half.

On the game, Wofford turned the ball over a total of 13 times, leading to 20 points for the Mocs. They were outrebounded 32-20 with only 5 offensive boards for just five 2nd chance points. The Mocs shot 58% from the field while the Terriers shot 46%.

Despite Chattanooga’s defense basically smothering him all game, the Terriers were led by BJ Mack, who logged his 2nd consecutive double double (6th of the season, 29th game in double figures this season) with 20 points and 10 rebounds. Morgan Safford logged 14 points with 2 rebounds and 2 steals. Max Klesmit was 5 for 11 in the field, scoring 11 points for the Terriers, but was a rare 0fer from 3 point range, going 0 for 3.

With the loss, the Terriers finished the season at 19-13 overall in Jay McAuley’s 3rd season. While it was not the result they wanted, Jay is proud of his team. “You are going to have years where you just don’t have the depth. This year we didn’t and we kind of ran out of gas a little bit. But I am very proud of our basketball team and what it stands for. I think every year you can see there is a lot of respect for these guys and these players and how they play and how tough they play and how committed they are. Everyone knows what Wofford basketball stands for so with or without injuries, that stayed the same this year and I am really proud of that.”