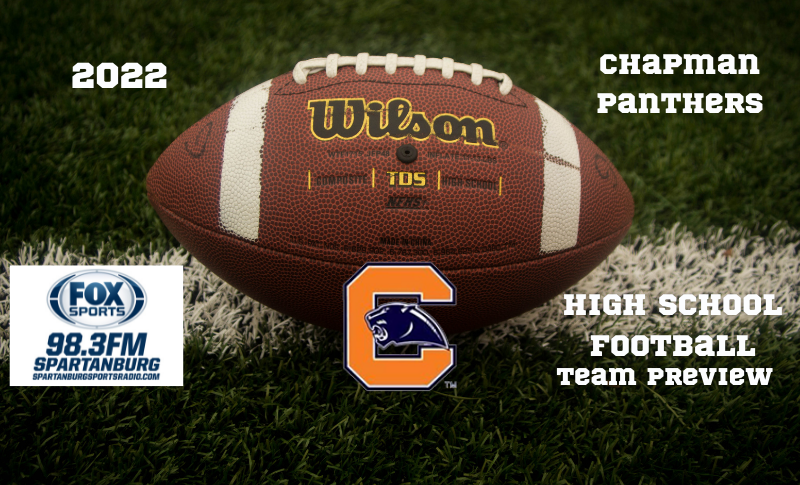 The 2022 High School Football season is just right around the corner. As teams wrap-up spring practice and get ready to start summer workouts, we will begin previewing the teams in our area.  As of today, 5/27, we are thirteen weeks away from week zero.

We begin our 2022 previews with a team that has a consistent power in class 3A for nearly the last decade, the Chapman Panthers.

Last year the Panthers entered the season with a lot of high hopes and again the Panthers had a tremendous season. The Panthers finished the regular season 7-2 and 5-0 in region play with their only losses coming to 5A Byrnes and midlands foe Brookland-Cayce.

The Panthers cruised in the first round of the playoffs with a big win over Blue Ridge but came up short in round two against the always formidable Chester Cyclones.

Heading into 2022 the Panthers will indeed have a lot of question marks.  They lose some big time players on both sides of the football, including stars QB Drew Settle and WR DJ Black .  Both of those losses for the Panthers are huge but, what may be the biggest loss is along the offensive line.

The Panthers have had basically the same starting offensive lineman for the last three years.  Anytime you can do that in high school football it is usually a blessing and a huge advantage.  The line has been good for the Panthers especially the last two seasons, anchoring one of the most prolific offenses in the state. The Panthers do have some guys returning that have seen some time while filling in during injuries as well as significant playing time when the Panthers had big leads, so its not a complete overhaul.

On thing the Panthers have been very fortunate with is their quarterback position.  The Panthers last three quarterbacks have been All-State caliber talent.  With the departure of Drew Settle, who will be the next in line in this growing line of excellent Chapman qbs?

Coleman Gray is the guy that backed up Settle last year and is the current leader to be the signal caller for the Panthers when the season begins in August.  Coach Cabiness says that Gray is  a “Very athletic kid, very physical kid, who will remind people of Mikele Colasurdo.” Coach Cabiness also stated that Gray is “Very prone to take off and run, and we are ok with that, he doesn’t mind contact at all, in fact sometimes too much.”

Can Chapman maintain their offensive juggernaut status in 2022 with a new line, a new qb and a mostly new skill group? That’s the big question in 22 for the Panthers.

On the defensive side Cabiness says that he will be taking back over coaching the defense and is excited about the players they have on that side of the football, and thinks they will be a fast and physical group.

The learning curve will have the be quick for the Panthers as they play a very tough schedule in 2022 that starts out against former region rival Woodruff on Week 0 and it doesn’t get much easier.

Next week Jordan will preview the Boiling Springs Bulldogs!