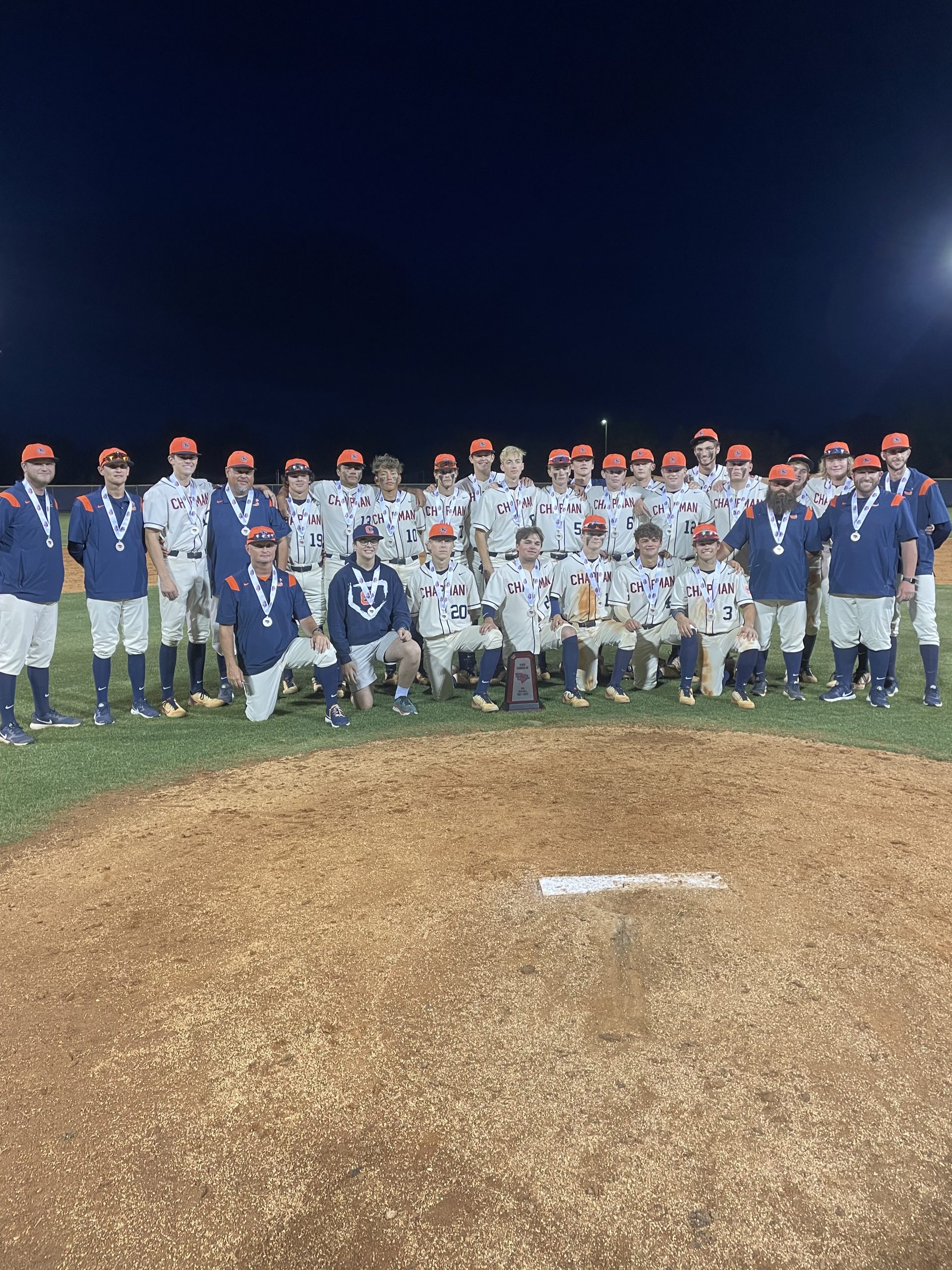 Well folks, the 2022 high school baseball season has officially concluded, and it was quite memorable. I already recapped what happened for all of our local teams except for Boiling Springs and Chapman since they were the only 2 remaining going into the upperstate championship round. Being that I have connections to both Inman and Boiling Springs, it is only fitting that I wrap it all up with them.

Boiling Springs won the 5A District 1 championship in exciting yet costly fashion as Davis Starnes delivered a line drive to left for a walkoff RBI single to beat JL Mann in a winner-take-all game 2. In the ensuing celebration in which the Dogs dogpiled, Starnes, who was one of the best hitters down the home stretch for the Bulldogs as well as one of their speediest baserunning threats, got caught at the bottom of the pile and ended up separating his shoulder, leading to him not being able to play in the upperstate round.

On top of Starnes’ injury, Bulldog ace and Clemson commit (who has been getting potential first round draft grades on several MLB prospect sites), reached his pitch limit in 5 innings in which he was dominant, holding JL Mann scoreless. He tallied 12 K’s, 2 hits, and 3 walks. The effort would end up going down as a no-decision for him after Corbin Childers struggled in relief and surrendered 3 runs to tie it, and unfortunately for the Bulldogs, it left them a little bit thin for upperstate as both Jackson Cole and Tristan Smith would be unavailable for the next 5 days.

Instead, it was the hero at the plate, Davis Starnes, that got the win on the mound as well, with a scoreless ⅔ of an inning.

In the upperstate round, Boiling Springs opened with a situation that on the outside looking in, seemed favorable for them. Despite the loss of Starnes and Smith’s being out due to the arm saving protocols, the Bulldogs would be paired against a region foe they had already taken 2 out of 3 from in their penultimate series of the regular season – Fort Mill. Even better, they would have to come to Boiling Springs.

As usual with postseason baseball, things did not play out as you would expect. Fort Mill was a different team in the postseason. They upset Dorman. Eliminated Clover. Beat a good TL Hanna. They were hot at the right time. Honestly, they were not a bad tea in the regular season. They were going to be a tough out, no matter how experienced you were with them or where yu played them.

Boiling Springs went with their #3 starter Landon Ellis, who despite 4 strikeouts, only 1 walk, and just 1 earned run, still got roughed up. He gave up 9 hits. The Bulldog defense had it really rough, making the Bulldogs their own worst enemy with 5 errors that led directly to 6 uneared runs. At the plate, they struck out 9 times and left 7 on base. Five of those 7 were left in scoring position. Ultimately, the Bulldogs fell in shutout fashion 7-0.

The Bulldogs would face an even tougher trial as they would go to Blythewood for an elimination game that weekend. Despite an incredibly strong showing from Ashton Smith on the mound, the Bulldog bats continued to experience the consequences of having lost Starnes. They were once again shut out, this time 2-0 to be eliminated.

Boiling Springs continued to stay true to their identity this season with strong pitching and a scrappy offense. But, ultimately, they played in a loaded region against lofty expectations to make a deep run. They didn’t make it to the upperstate title game, but they did come in 2nd in a competitive region, won their district, and had several big moments. I don’t know that any Boiling Springs team could ever live up to the special run that the 2008 Cardiac Dogs made my senior year. But I do know that when a program can be as consistent as Jeff Lipscomb has had them, it is a success that can be built on by whoever assumes the helm whenever he does pass the torch later on down the road.

Chapman also faced favorable circumstances as they started the upperstate round with a Seneca team that burned their ace Jacob McGovern to win the district, while Steven Fusaro was able to get enough production from Jack Settle to save all his best arms. The Panthers ran the table in the upperstate round, by winning a slugfest with Clinton 9-7 and then eventually winning the winner-take-all game 2 of the upperstate championship game with Powdersville behind a 7 run 6th inning to take a 9-2 lead and lock up the Panthers’ first state championship series appearance since 2003 – 19 years ago – when Steve Fusaro was a senior on that team.

The Panthers had a tough draw for the state championship series as Oceanside Collegiate won the lowerstate crown. The good thing for Chapman was that once again, they would be just fine as far as pitching depth and availability go.

The 3A state championship series opened this past Saturday at Shipyard Park, just outside of Wando, SC along the banks of the Wando River, the home of the Oceanside Collegiate Academy Landsharks. It was a situation where whoever took game 1 and got the upper hand, would probably go on to win the series.

Chapman started junior Jacob Cogdell in game 1, who pitched about as well as you could ask when you are put into the biggest game of your life on the road against an opponent that, though you can argue they recruit (I will dig more into thoughts on that in a second), making things unfair, is an absolute juggernaut, with D1 commits and prospects up and down the lineup.

Cogdell kept the Landsharks at bay for most of the game until Oceanside finally broke the game open in the 4th inning to take a 6-2 lead. Ultimately, it was not at all on Jacob. Chapman’s hitters faced several clutch hitting situations in which they were not able to come through. Ricky Montalvo was 0-4 at the plate with 3 K’s. Cason Owens had 2 Ks. Devin Roe tallied 2 Ks in his 3 ABs. Walt Waddell was 0-2 with a walk and 2 Ks. Johann Rodriguez was 0-2 with 2 walks and 2 strikeouts. Drew Settle was 0-4 with 3 K’s. The only Chapman hitter that produced was Jarren Metcalf, who was 3-4 with 3 singles and 2 RBIs. Hudson Moss was the only other Panther with an RBI, who gave Chapman a brief 2-1 lead in the 2nd with an RBI double.

Ultimately, the Panthers made the trek back up I-26 down 0-1 in the series after a 7-3 loss after striking out 15 times and leaving 8 men on base.

Regardless of your thoughts about whether or not it is fair that charter schools can recruit.. whether or not they do, I do not know, but what I do know is that if they are, unfair as it may be, they are only playing the system to their advantage,  just like college sports with the Name-Image-Likeness deals and the transfer portal. Same as with college sports and NIL/transfers, there is a need for some degree of regulation. But until that day comes, this is how things are and we are powerless to do anything but complain about it.

Contrary to popular belief, these teams CAN be beaten. Oceanside Collegiate was beaten by Landrum for the 2019 2A state title. Gray Collegiate is on the brink of maybe losing the 2A state title to Andrew Jackson. Chapman HAD their chances to do some damage and gain an upper hand in the series and they could not execute when it mattered. The fact they could not do that has absolutely nothing to do with charter schools recruiting. Leaving 8 on with 15 K’s won’t win many games no matter who you are playing.

Now back to the story of the series..

Tuesday night, the Panthers had a chance to force a winner-take-all neutral site game 3 by evening up the series with a win. You had to like Chapman’s chances. The ace, Ricky Montalvo was going to be taking the mound in front of a packed house home crowd. They were 5 rows deep in lawn chairs between the dugouts, the stands were full, there were fans in lawn chairs down both the left and right field lines, and they had filled up some additional bleacher seating along the left field line. Inman townfolk were even standing up by the back side of the softball dugout to catch a glimpse of their Panthers.

Sadly, what we hoped for did not come to fruition. From the beginning, it was evident that Montalvo did not have it. He was knocked out of the game in the 2nd inning after Oceanside jumped to a 5-0 lead. 1 more would be tacked onto Ricky after Jack Settle gave uo a 6th run on a 2 out RBI single. Drew Settle came on to pitch the next 3 innings, helping hold Oceanside at bay until he gave up 2 runs on a 1 out single in the top of the 5th to make it 8-0.

That score would hold to the end as Chapman could only muster 2 hits all game.

As bad as it is to drop a state championship, especially after 19 years of waiting to get back there, a positive sits on the horizon for the 2022 SCHSL 3A State Runners up and Upperstate Champions..

It will NOT be another 20 years before they’re back in the state title series. The success of this season, coupled with the efforts to build a good little league and subvarsity program at Chapman (BTW, their subvarsity teams were phenomenal this year), laid the groundwork for the CHS baseball program to be taken to new heights. If you live in Inman, you should be thrilled to know that the future is incredibly bright as Steve Fusaro continues to realize his career-long vision for the program – to not only win a state championship, but to also be one of the premier programs in the state.

In the words of Harry Caray, “Sure as God made green apples, the Chapman Panthers will win a state championship, and maybe sooner than we think.”