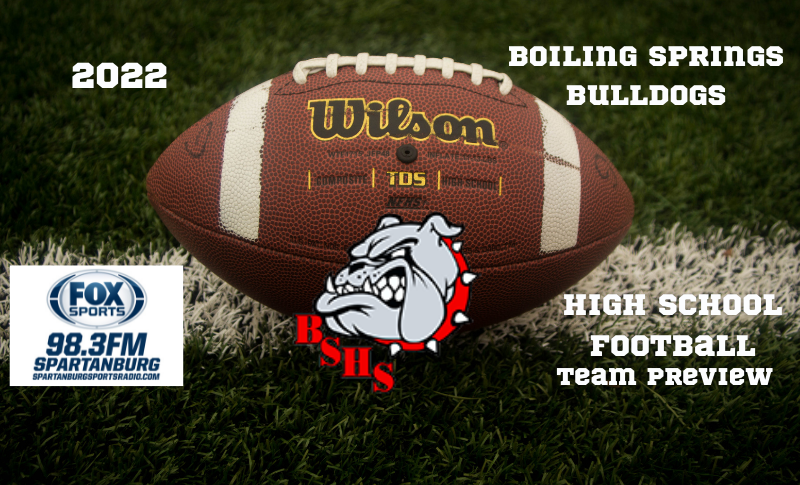 The Boiling Springs Bulldogs had a very challenging season in 2021. They had a roster full of youth and lacked not only depth at many positions, but size enough to keep up with many opponents. They never could settle on a QB, having experimented with a couple of different ones including Kairon Hines, Ke’tron Adams, and even a freshman in Lincoln Huskey.

There were a few bright spots for the Bulldogs in their 2021 campaign in which they went 1-10 and finished 4th in region 3-5A, such as running back/wide receiver Kam Williams (who rushed for 743 yards on 149 carries with 5 TDs and hauled in 21 passes for 185 yards) as well as halfback Carmelo Martin (who tallied 568 rushing yards on just 67 touches with 9 TDs).

The Bulldogs will now feature a completely different look as Coach Rick Tate retired at the end of the 2021 season after 8 years at the helm. Tate is succeeded by Matt Reel, who came to Boiling Springs after a 5 year stint as the Head Coach at North Myrtle Beach back at the end of January.

Reel has extensive coaching experience that has included 7 years as an outside linebackers coach and running backs coach in North Carolina and 3 years as Offensive Line coach and Offensive Coordinator at North Myrtle Beach prior to becoming the Head Coach. During his tenure at NMB, Reel compiled a 42-17 record, never having posted a losing record and consistently going to the 2nd or 3rd round of the playoffs. He also led the Chiefs to a lowerstate championship game appearance in 2020.

Matt Reel brings a whole new level of up-tempo intensity, physicality, and a strong mentality with him to Boiling Springs and really emphasizes improving in the weight room, getting better at the offensive and defensive lines, and creating a greater sense of accountability both on the field and in the classroom. When asked about what he envisions for BSHS football, he said “We will be a hard nosed, tough, effort-based football team. We will take pride in being a disciplined team and our work ethic in the weight room. We will establish ourselves as a team that can run the football, maintain a physicality at the point of attack and be known for an aggressive attacking defense. We will be sound in all phases of the game: offense, defense and special teams.”

Since starting at the end of January and installing the new strength training program, Coach Reel has noticed that his team has already shown an incredible willingness to show up and put in the work to get bigger, faster, stronger, and more physical, which is already paying dividends and building towards one of his goals to shift the culture of BSHS football. His aim was to change the outside perception of Boiling Springs football and create a culture of hard work and discipline that will develop into a program that is expected to compete for championships every year. Getting his team to buy into that and take pride in getting into a daily grind in a year-round program has been a fantastic first step towards achieving that.

The Bulldogs will feature a lot of new faces on the sidelines this Fall with Matt Reel. They will have new offensive and defensive coordinators, a new strength and conditioning coach, and a couple of new position group coaches.

Boiling Springs loses key wideouts Quanye Nails and Keondre Keenon, leading tackler Joston Miller, 2nd leading tackler Malik Harper, and a solid tight end and defender in Brent Fowler. But, they return a large percentage of their roster from the 2021 season that consisted of mainly sophomores, and coach says that there are also a lot of newcomers that are hungry and could make big contributions to the team this season. The most notable returnees are senior running back/receiver Kam Williams, junior running back Calvin Jackson, junior outside linebacker JoJo Barrett (who averaged 4.3 tackles per game as a sophomore), and senior Spencer Eison (20 solo tackles in 2021).

The Bulldogs have a few less names in the QB room with the graduation of Ke’tron Adams and the transfer of Kairon Hines to Spartanburg, but Coach Reel is excited about the developmental potential for sophomores ZY Landrum and Lincoln Huskey.

All in all, the outlook is hopeful for a much better season and a bright future for this Boiling Springs team that is still very young with a lot of growth still to be done. If you’re a Bulldog fan, you can’t help but like the direction things look to be heading with new leadership up and down the board and the enthusiasm that has been shown by players and coaches alike so far. They are poised to make some noise again sooner than we might think, and they may just surprise a few this year.