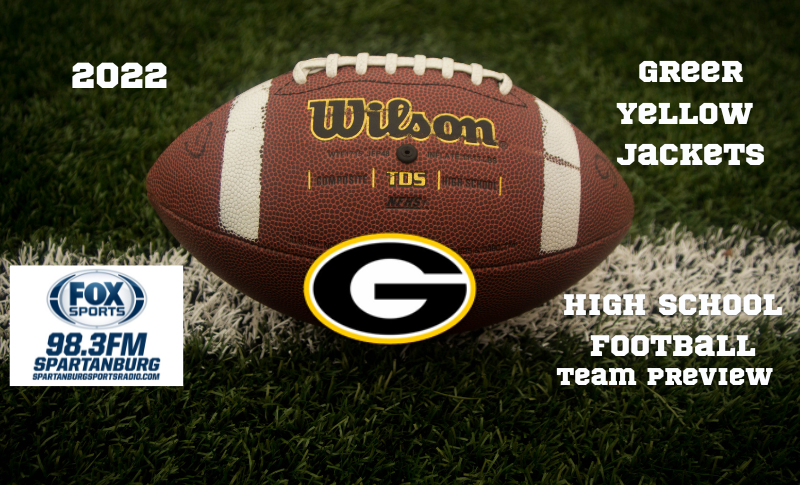 Coach Will Young and the Greer Yellow Jackets have plenty of reasons to be optimistic heading into the 2022 season. Last year the Jackets qualified for the playoffs before falling in a close game to Westside 24-21 in the opening round. Greer will need to replace some talent from a team that finished the year 5-6 against a very difficult schedule. The schedule isn’t any easier this year and there are several questions that will need to be answered on the defensive side of the ball, as they will have to replace playmakers Izzy Rhodes and Malaki Fuller who departed after graduation.

The Jackets will also have some new faces on the offensive side, with rising Senior Josh Runion expected to take over at the quarterback position. Runion has a strong arm and looked very good in the spring game. He will be throwing to a very deep receiving corps this fall, but as we all know, Greer’s success will depend on the effectiveness of the running game. While it’s unclear who will be the top running back this fall, the Jackets have several options at the position, most of whom are underclassmen.

Greer will also be breaking in some new starters on the offensive and defensive lines. Size could be an issue along the offensive line, but what they may lack in size they make up for in athleticism. Last year they averaged over 27 points per game, and I expect that number to go up this year with Runion running the show.

The defense will be tested early in the year with games against a physical Daniel team to open, followed by a matchup against a very athletic Hillcrest team. If the defense can keep teams in the 20’s and force some turnovers, I think the offense will be good enough to have Greer in position to compete for a region title. This team will be battle tested by the time region play comes around, and with several players seeing varsity action for the first time this year I expect to see improvement as the season progresses.

There are plenty of questions about this team, but if they can pull out some close victories early I think this young team will build some confidence and could be in for a great season. If the rushing attack looks like it has in recent years I expect to see this team in the postseason once again. I can’t wait to see this team in action and Yellow Jacket fans should be excited about this group of kids and coaches. Below is the 2022 schedule.