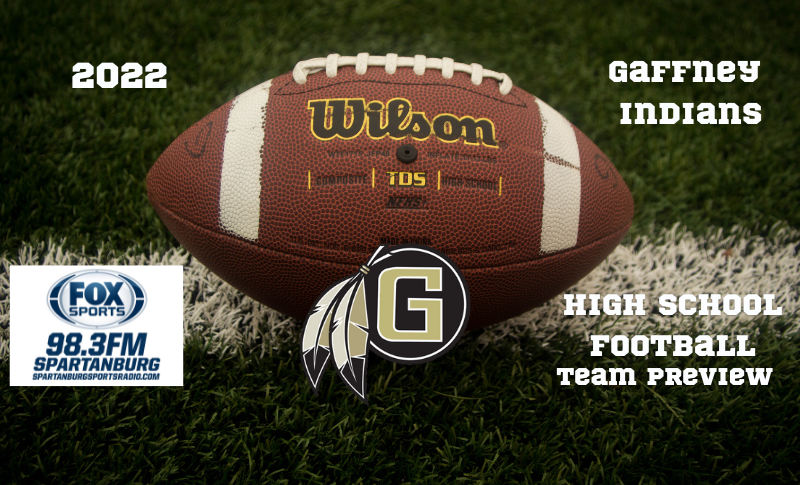 The Gaffney Indians did the impossible, or at what seemed impossible to many, when they knocked off the 5 time defending champ Dutch Fork Silver Foxes to win the 2021 5A State Championship.  This was no surprise to Gaffney fans however, as expectations are always high and will be once again in 2022.

Let’s not forget that not only did Gaffney beat Dutch Fork, but the Indians went 15-0 defeating programs like Spartanburg (twice), Summerville, Dorman, Byrnes and Northwestern along the way.  Whether it was the offense led by 2 outstanding RBs Tyler Smith and Ken Littlejohn needing to put up 40 or more points, which they did 6 times, or the Defense led by LB Landon Bullock holding teams to under 20 points, which they did 10 times, Gaffney was as complete of a team as you would fine in the state last year.

So the question is, will Coach Dan Jones’ boys be favored to defend their title in 2022.  Let’s have a look:

Loftis will have 3 new pass blockers in front of him as only Seniors Johan Aragon and Joseph Jordan return.  5 others are battling for the last 3 spots including Sr Ashton Martin.

As far as who will replace the 2 incredible talents at RB for the Indians, who each rushed for over 1000 yards and had over 50 combined TDs, well it shouldn’t surprise you that Gaffney has multiple RBs ready to step up.  We mentioned you’ll see Jefferies, but expect also to see Tristan Hair and Qua Tate in some form or fashion in the backfield.

The good news for Gaffney fans though is they only lose 1 starter on Defense. NT Carlos Lopez has graduated but both defensive ends Nathan Johnson and Clay Putnam return.

Safety Eddie Tate-McDowell has graduated but the star of the Secondary looks to be rising Junior CB Kind Dowdle. There are several options in the Secondary for Coach Jones.

We’ll certainly learn a lot on Aug. 19th as Gaffney opens the season traveling to South Pointe.  One thing is for certain: No matter how many Seniors move on, Never count out the Gaffney Indians.