Connect with us
Week Zero
STANDINGS 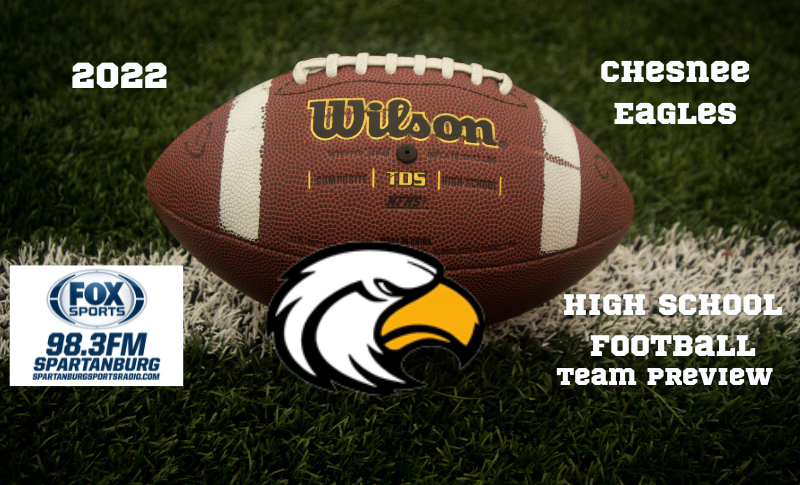 As we keep counting down the days to week 0 of the 2022 high school football season (35, by the way.. Just 5 more weeks to go!), we continue our weekly preview series with the Chesnee Eagles.

Since Clay Lewis started as head coach at Chesnee in 2019, with the intention of establishing a more run-centric option-style offense, the question has been whether or not it would work there. That question was answered in his first season as the Eagles went 6-7 overall and made it all the way to the 2nd round of the 3A playoffs. They followed it up with a remarkable 7-3 campaign in 2020, where they won region 2-2A and made it to the 2nd round of the playoffs, where they fell to Abbeville.

As it turns out, they had just the right players and enough talent in place to make it work. They had a great dual threat QB in Nyquille O’fair, a stellar wide receiver in KJ (Kjymie) Valentine, an excellent blocking and receiving tight end in Cole Hoskyns, and solid running backs such as Bryson Thompson. Even now, although they are young, they still have the talent in place to have success with the “new” system.

Last season was a tough one for Chesnee as they had to basically start from scratch. The Eagles, with a roster that consisted of 7 seniors, 10 juniors, 14 sophomores, and 8 freshmen, fought and clawed their way to a 3-8 overall record. They were able to score lots of points, averaging 24.5 per game. But they struggled on defense, giving up 378 points over the course of 11 games (an average of 34.4).

Needless to say, last season was a low point (not necessarily rock bottom. But a definite low point) for Chesnee, and the Eagles are eager to put it behind them and have a much better season in 2022.

Honestly, since pretty much the entire roster is returning with a year of experience under their belt, you have to expect that they will be an improved group this year. Chesnee has 26 lettermen returning, including 7 starters on offense and 7 starters on defense.

The strength of the team is the offensive line. Four of the 7 returning offensive starters are on the O-line and that added experience up front could be a boost for their talented sophomore quarterback KJ Proctor, who Clay Lewis says is a player to watch out for this season.

Coach Lewis has been thoroughly impressed with the team chemistry and work ethic that his Eagles have shown throughout spring and summer workouts so far, and is excited to see how much better this young team will get as they continue to grow over this season and the next couple of years.

Chesnee opens their 2022 campaign with Blue Ridge on August 19th.