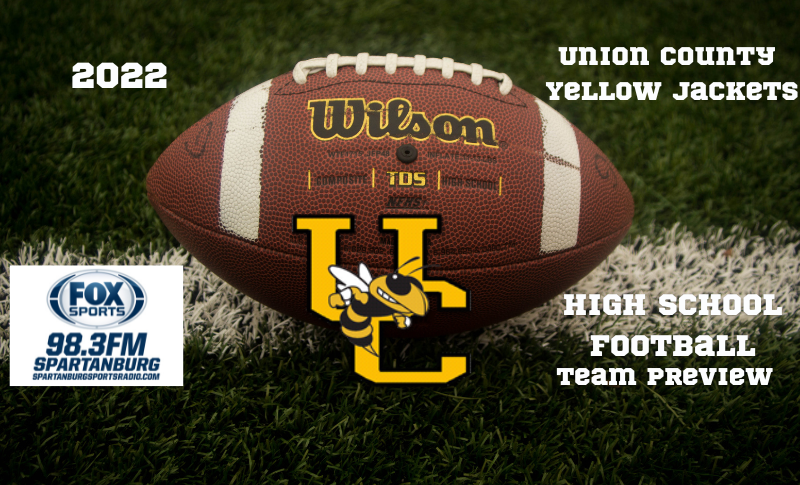 2021 was a disappointing season for the Union High School Yellow Jackets.  Coming off a 7-2 record in the 2020 season the Jackets expected to battle for the region crown in 2021. That was not to be.

The Jackets started the season with a Covid shutdown of the entire program that caused the cancelation of their first two games. The Jackets never seemed to fully recover from that and after more Covid issues that sidelined personnel and coaches the Jackets were finally able to get in the win column on the last week of the season and ended the tough year with a 1-7 mark.

Coach Thompson, who isn’t one to make excuses, said that he was really proud of last years team and the way they fought and never gave up.  The team particularly struggled on the defensive side of the ball in 2021 which led to some changes on the coaching staff.

“Yeah, I fired the defensive coordinator,” said Thompson. “That was me. I knew we needed to change something up and we brought in Jason Hatcher will be calling the defensive plays this year, and I think he is one of the best in the state.” Hatcher and Thompson previously worked together on staff at Dutch Fork High School.

Thompson expects the defense to be young and will have to deal with some inexperience but he says the kids have learned a lot this summer and are adapting well to the changes in the scheme on that side of the ball.  Thompson also stated that the Jackets won’t be very big up front but the Jackets plan to combat that with odd fronts and quickness to keep the opposing offenses off balance.

Thomson says that he is excited about some of the returning players on defense like Alex Wagner and JJ Thomas who both saw significant playing time last year and have had great summers for the Jackets. Overall Thompson expects the defense to be athletic and smart which are great ingredients in a recipe for success on that side.

Over on the offensive side of the ball the Jackets will also have a different look and style. After the last several years of having quarterbacks that were big dual threat guys that could make plays as easy, if not easier, with their legs and their arms Union will have a quarterback this year who is a more pro-style QB in Ben Black. Black is a senior who has seen a fair amount of playing time over the last couple of years. Thompson said, “We have full confidence in Ben, he’s a great leader with a great work ethic and he knows what his strengths are. We are excited about what he’s going to do for us.”

Black will have some help offensively from receivers like Bryce Barnett, who Thomson says has had a great summer playing one of the outside receiver positions, rising junior Will Turner, and MJ Porter.  At running back Thompson believes they have several guys who will be able to get good playing time at that position, but Cam Owens is expected to be the guy who gets the bulk of the carries for the Jackets. Thompson says that Owens, whose brother Junior Owens was a running back for Union, has the potential to be a “really special player.”

Thompson also told me he feels pretty good about the offensive line entering this season. With several returning players who were “thrown into the fire last year,” the Jackets have some experience up front to help protect their QB and open some running lanes for a talented running back.

As you see below, Union didn’t do themselves any favors with the scheduling, playing a very tough slate that includes the defending 5A champs, and several other teams that made very deep playoff runs in 2021.

Overall I expect Union to be much improved in 2022. This coaching staff has made some changes that should immediately improve the product on the field and result in a better year for the Yellow Jackets. Union County will open up week zero at Newberry with an 8:00 kickoff.