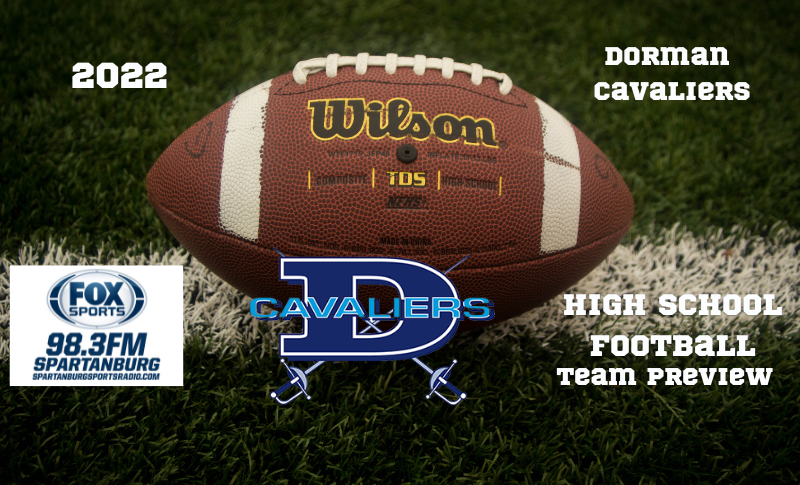 2021 was a bit of a disappointing season, at least by Dorman standards. The Cavaliers finished what turned out to be Coach Dave Gutshall’s 29th, and final season at Dorman with a 4-6 record. The final four losses for the Cavs were all by 7 points or less so they were very competitive, but struggled to close out games. The season ended with a 41-35 loss to T.L. Hanna in the first round of the playoffs.

There have been several changes in the offseason, most notably the hiring of a new head coach in Dustin Curtis. Coach Curtis comes to Dorman after having great success at A.C. Flora, including a state title just a few seasons ago. He will have some big shoes to fill but he is confident he is up to the task.

The Cavaliers bring back several starters on both sides of the ball, most notably on the offensive line. The offensive line has been a strength for Dorman in recent years and 2022 doesn’t appear to be any different. The unit will be led by a pair of D-1 commits in Markee Anderson (S. Carolina) and D.J. Geth (UNC). While they will most certainly be a power run team behind a talented offensive line, Coach Curtis wants them to be able to throw the ball enough to keep defenses off balance.

They return quarterback Hudson Talley who has looked good in offseason workouts and has the coaching staff confident they can stretch the field when needed. He will be running an offense led by new offensive coordinator Stephen Cagle, who learned his system under current Coastal Carolina coach Jamey Chadwell.

You can expect to see multiple formations and shifts from the offense this year, and they have the personnel to be productive from both spread and power formations.

Defensively the Cavaliers expect to be strong along the line. The defensive line has given the offensive line some trouble in practice, and seeing as how the O-line is expected to be one of the best in the state, that has the coaching staff excited.

Expectations are high at Dorman, but they play in the toughest region in the state so nothing will come easy. Dorman should be back in the playoffs this year and has the pieces to compete for a region title.  They should be battle tested by the time region play comes around after non-region games against Greenville, Greenwood and Clover, before opening region play against Boiling Springs. The final three games of the season are brutal as they finish with Byrnes, Gaffney and Spartanburg to close the year. Hopefully the Cavaliers will be playing their best football when October rolls around.