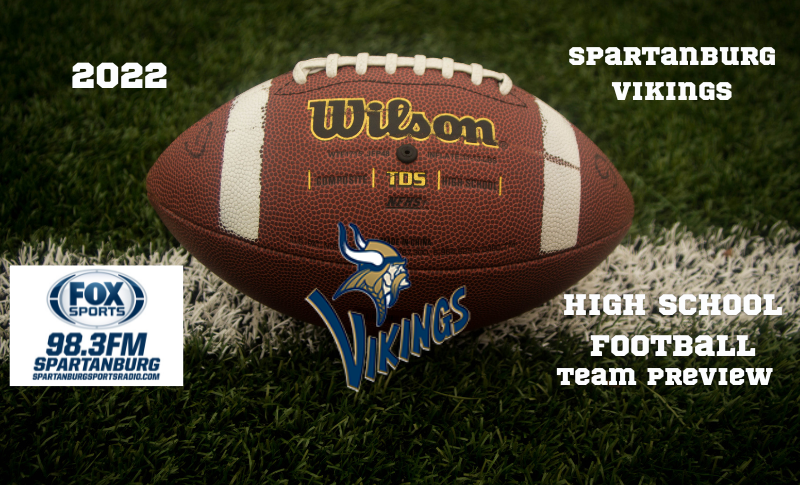 When Spartanburg hired Mark Hodge to replace Hall of Fame Coach Chris Miller, expectations were, even if not too fair, that he would turn the program around rather quickly. That’s the respect everyone has for Coach Hodge, a 2 time State Championship winner at Chapman. While all Viking fans I spoke with believed it would happen, quietly everyone wondered if it could happen within a couple of years.
Enter 2021.

In just his 2nd year, and let’s face it, year 1 in 2020 wasn’t a true first season, Mark Hodge and the Vikings brought a Region Championship back to the East Side of Spartanburg. The Vikings, following an unbelievable 4th Quarter comeback against Dorman, won 3 straight playoff games before falling to eventual State Champion Gaffney in the Upper State Finals.

The good news for Viking fans is that many of the names they saw lead Spartanburg to a Region Title are back.
On Offense it all starts with rising Sr QB Raheim Jeter, who is one of the top QBs in the state in 2022. It was so much fun to watch the Veteran put it all together after a foot injury forced him to miss the first 5+ quarters of last season. Jeter had over 3000 total yards last year and with several D1 offers on board, is just looking for that missing State Title Ring to wrap up his HS career.

At Running Back, the Vikings have multiple options. Sr Drek Carter returns for his 3rd year as a starter and we all know how elusive he can be when healthy. Jaheim Harrington and Trey Harris will provide depth but Viking fans will soon learn the name Keke! The Freshman running back is already making a name for himself amongst hard core Viking Football fans.

Wide Receiver may be the deepest unit on the team with Sr Andrew Danton back for another year. He had over 1000 yards receiving last season and fellow Sr Que Moore will be tough to slow down once again. Jr Ra’el Senghor showed his quick burst off the line last year and will play a bigger role in 2022. With all this speed, it may surprise you to learn that transfer Khamari Cunningham is the fastest of them all. Then of course is the well talked about rising Sophomore class which features Justin Rice and Calvin Choice. These 2 will see the field early and often.

The OL features 2 names Viking fans should know well…Seniors Darrell Brannon and Ian Squires. The Vikings lost 3 starters from the 2021 squad but injuries last season mean that this group won’t be raw in 2022.
Defensively, the Vikings have several names back that you’ll remember as well, but this is also the deepest group in many years.

It starts up front with 3 year starter Cam Jackson at NT. He’ll line up next to several veterans with experience including Duncan Dawkins.

Linebacker was hit the hardest in terms of graduation. Judah McJempsey recorded over 140 tackles on the season so replacing him along with OLB Deandre Davis will be a challenge. But the Vikings have several players ready to step in. Junior Bennie Littlejohn saw a ton of snaps last season and Terrian Nelson is healthy and ready. Sophomore Cam Smith will play a lot as well, one of the many Sophomores who will contribute after a perfect C Team season last year.

Jacob Mattison is back at OLB and will have a much more featured role this season. He’ll play alongside Tyler Mathis who played a lot at multiple positions as a Sophomore last year.

In the Secondary there are several players who will see time at both CB and S. Jayden Brown is back at CB and Kairon Hines is in a Viking uniform after a year at Boiling Springs. Jaden Coleman, Jashad McClean and Charles Woodruff will all see time at Safety and trust me there are others who will see plenty of snaps as well. This group is long, and fast.

Overall, the Vikings are as deep as they’ve been in years with tons of experience in the starting lineup, a Sophomore class that’s been talked about for a couple years, and a FR waiting to show you he’s ready. This year is gonna be fun.