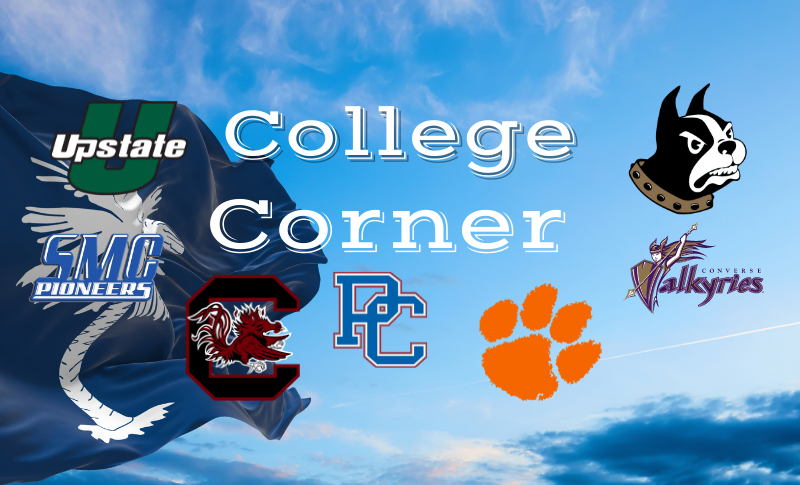 You are probably not counting down the seconds until college basketball starts. Especially since it really does feel like football season just started a blink ago. But for those of you who are not counting, we are down to less than a week. For the Wofford Terriers, who were picked at #5 in the preseason SoCon coaches and media polls, the season starts in less than a week.

Jay McAuley and the Terriers are coming off a 19-13 (10-8 Southern Conference) campaign in 2021-2022 that saw a fair bit of success, including a big win on the road at UGA and earning a first-round bye into the SoCon tournament, in which they defeated VMI in the quarterfinals with a late-game rally 68-66 before bowing out in the semifinals with a 79-56 loss to David Jean-Baptiste, Malachi Smith, and the eventual SoCon champion Chattanooga Mocs, coached by Lamont Paris, who went on to be named Frank Martin’s successor at South Carolina.

The 2021-22 Terriers were among the best 3 point shooting teams in the entire Southern Conference, averaging 9.5 treys per game and shooting 35.6% from range all season. Offensively, the Terriers averaged 72.6 points per game, outsourcing opponents by a margin of over 6. They were also very good at forcing turnovers, with 424 of them to their defense’s credit and an average of 13.8 points off them per game.

Those numbers, along with the team, will look different in 2022-2023. The transfer portal was not too kind to Wofford. Max Klesmit, their leading 3 point shooting threat and the leading scorer, transferred to Wisconsin (Klesmit is a native of Neenah, Wisconsin). Isaiah Bigelow, the leading rebounder and one of the biggest inside presences transferred to Richmond. Ryan Larson, another guy who can score from anywhere on the court, transferred to the College of Charleston. Sam Godwin, who was one of the strongest shooters off the bench last season, transferred to Oklahoma. Morgan Safford, who started all but 8 games last season portaled his way to Miami (the Ohio one).

Only 4 players return from last season’s squad, and only two of them were starters. One is the 6’ 8” 245 pound senior BJ Mack, who led the team in almost all offensive statistical categories, and will undoubtedly be poised to do it again in 2022-2023. The other is Messiah Jones, a senior forward that stands at 6 foot 6 and 220 lbs. Jones was injured for the majority of last season, having played and started in just 5 games and will look to have a big bounceback season this year. It is noteworthy that both BJ Mack and Messiah Jones received pre-season all SoCon honors.

Another notable returner is Corey Tripp, a 6’3” sophomore guard that played in 25 games last year but never got to start, having played 125 minutes off the bench in which he shot .500 from the floor and .750 from the freethrow line. Jonathan Steelman is the lone other returner (who is Coach Todd Steelman’s son, if you listen to Bump and run in the mornings, you know who that is), a 6’ 3” 180 pound guard that has not gotten much playing time in his career, but may very well get a few chances in 2022.

The rest of the roster? Mostly freshman and sophomores, with 4 of those being transfers. Jackson Sivills (soph-Murray State), Tauris Watson (soph-Gulf Coast State, alum of Gray Collegiate Academy), Carson McCorkle (soph- UVA), and Kyler Filewich (Jr- Southern Illinois) make up the transfer class. The most notable to look out for seems to be center Kyler Filewich, who stands at a menacing 6 foot 9 and 250 pounds. Last year, we saw BJ Mack and Isaiah Bigelow terrorize opponents from under the rim with their sheer size. This year, I look for Filewich to fill Bigelow’s shoes and to make for a nice 1-2 punch with Mack.

The 3 freshmen added to the roster that Jay McAuley is most excited about are Amarri Tice, Chase Martin, and Adam Silas. All three a proven winners, having been key contributors on their high school and AAU teams. Martin was a 3 time all-conference player at Jenks HS in Oklahoma and having been a key part of 71 wins over his 4 years there. Tice, a former top 40 player in New England that comes from South Kent School in Connecticut, averaging consistently around 15 points per game with > 5 rebounds per game. In AAU ball, he shot 47% from three point range. Silas brings lots of speed to complement his defensive and scoring abilities.

The 2022-2023 Wofford College basketball season gets underway November 7th as the Terriers will host the Bob Jones Bruins at 7:00 PM in Jerry Richardson Indoor Stadium.