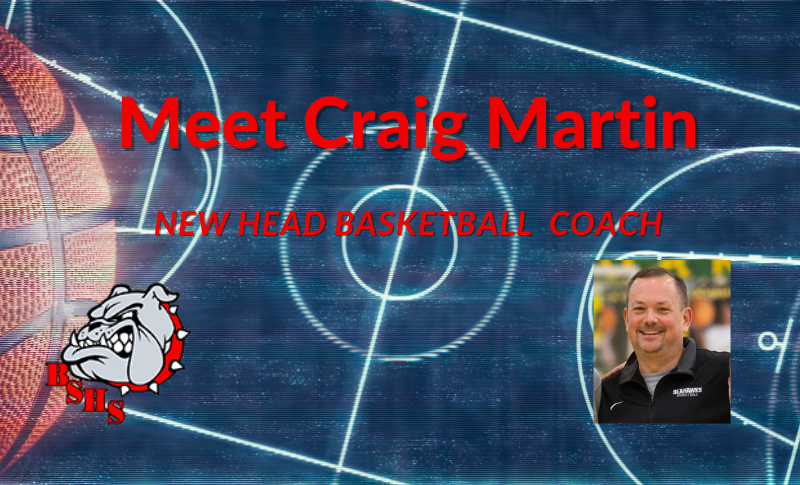 A new era will be beginning as Curtis Nash stepped away to move to a different role in the athletics department at Boiling Springs High School. At the end of March, it was announced that Craig Martin, who had been at Myrtle Beach High the previous 13 years and experienced quite a bit of success –  including 12 playoff appearances, making back-to-back lowerstate championship games in 2019 and 2020, and compiling an overall record of 150-147, would be taking over the helm of the Bulldogs’ boys basketball program.

Coach Martin was drawn to Boiling Springs by a number of different factors, but the biggest selling point for him was the school’s leadership. Martin has worked with BSHS principal Zach McQuigg previously while they were both in Horry County, so he liked the idea of reuniting with a familiar face. But, the vision for the school that McQuigg and BSHS Athletic Director Evan Moxie share for the school is something that is very much in line with what Martin stands for. He also notes that he and his family amost immediately fell in love with the Boiling Springs community and that he can think of no better place to raise his 2 youngest children.

“The community and the school are hungry for a committed coach and program that is going to represent them on and off the court. I have received nothing but support since day one and the players have been extremely receptive to all that we are doing.”

Martin comes to Boiling Springs with an extensive basketball and coaching background. He is a native of Michigan and grew up about 30 minutes outside of Detroit. He attended Oakland Christian High School in Auburn Hills, a stone’s throw away from The Palace. So, naturally, he grew up a Pistons fan. As a matter of fact, when he was in high school, he had the unique opportunity to attend a few of their practices as well as work out with some of the players. Some of what he learned from those experiences remains a vital part of his style and pedagogy as a coach today – being extremely physical and in your face, particularly on defense, just like the “Bad Boys.”

Being from the Detroit area, where basketball is King, and having a father with a super competitive nature, Martin has been around the sport and has had a drive to compete at his very best while trying to prove others wrong from a very early age.

He began playing when he was in 3rd grade, and enjoyed a nice playing career. In high school, he was a 2 time All-State player, accumulating 1,600 points. His junior year, he led all players from within Oakland County in scoring (He says that you may never believe him, but the guy he beat to that? Chris Webber. If that seems wild to you, he also has played 1 on 1 with Joe Dumars).

After high school, Craig went on to play junior college ball at Oakland Community College. After graduating, he realized that though his playing days were done, he could not just walk away from the game he truly loved, so he decided to get into coaching at the age of 22 while furthering his education at the University of Michigan. He got his start as the 7th and 8th grade coach and a varsity assistant under his former head coach Ed Mehlberg at Oakland Christian High, with whom he still maintains a strong relationship to this day.

He has a simple philosophy which he attributes to his high school coach/mentor – get the absolute most out of each player that he has the opportunity to coach and prepare them to be the best they can be, not only on the basketball court, but in life. It is never just about basketball. He stresses the need to be mentally and physically tough and never back down from anyone or anything – always accepting the challenge and taking the fight to the opponent.

His vision for Boiling Springs is to build a program based on his 6 “non-negotiables” – teamwork, toughness, effort, execution, communication, and loyalty – all while creating a positive experience that provides his players with the tools to be successful in whatever they plan on doing for the rest of their lives.

While Coach Martin has always enjoyed working with kids, which was a strong determining factor in his decision to get into coaching as well as teaching (Martin is also a US History teacher at BSHS). But, obviously, his life is so much more than just Xs and Os and historical dates on a dry erase board.

Craig is also a big family man, a quality instilled in him by his mother, who he says was always so selflessly committed and loyal to the family and doing whatever needed to be done to help others.

His wife, Kate, who like his family as he was growing up (no joke –  he says it was not uncommon for there to be an entire section full of Martins in the stands cheering him on when he played), has been a huge support for him. She assists him by managing social media for the team, as well as promoting the program and players. They have 3 children – sons, Xavier (who is 19 and a student at Anderson University) Cass (11) and daughter Sadie (5), who enjoy being coach’s kids and do a great job of sharing their dad with the players.

In his spare time, Martin enjoys spending as much time with his family as possible.

When asked about some of his most fond memories with his kids, he recalled going to Disney World during a hurricane and having almost the entire place to themselves.

“Sadie and I have the world record for consecutive goes on the teacups, having gone 8 times in a row without ever getting off the ride.”

He also recounted having a wholesome “proud sports dad” moment when he witnessed his son Xavier complete a 4 point play to defeat Darlington as a senior in high school.

“I did all I could not to run around the court like a mad man. I‘ve never had a player work harder and do exactly what he was told better than Xavier.”

Martin is most excited about the effort his team has put in so far since he has taken over the reins of the program, and says to watch out for one player in particular – Senior point guard Tre Locklear, who is committed to Limestone University.

“These kids have really put in the work this offseason and have done absolutely everything we have asked of them and I look forward to the benefits of their hard work. And Trey is better in person than he is on video. I have loved watching his game develop over the past few months and I believe that our style of play will benefit both him and our team as a whole this season.”

You can catch Coach Martin, Trey Locklear, and the Bulldogs in action soon, as they will open their 2022-2023 campaign on the road with the Clover Blue Eagles on November 29th at 8:00 PM. After one more road game at Wren on December 1st at 7:30, the Dogs will host Chesnee December 2nd with tipoff set for 7:30 PM.