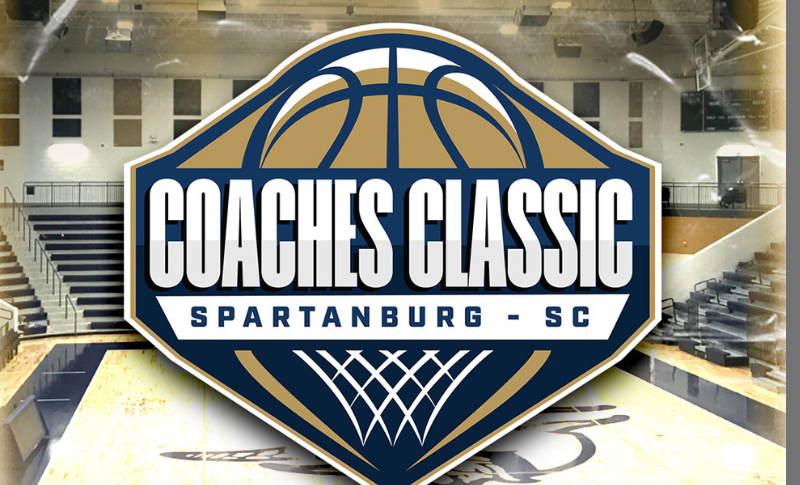 Saturday, Spartanburg High School hosted the first annual Coaches Classic showcase at Viking Arena. Things were slightly different from your typical high school basketball game as this showcase featured a 35 second shot clock and 16 minute halves rather than the typical lack of clock and 8 minute quarters. Of the 8 teams involved, 4 of them were from our local area – Byrnes, Gaffney, Spartanburg, and Dorman.

Here’s a brief summary of how each game went and what is next for each team..

Byrnes opened things up with a perennial contender from the midlands – the Ridge View Blazers. The Rebels, fresh off a 74-50 win over Greer at home Friday night that moved them to 6-1 on the season, had a question mark coming into this one as Junior Point Guard Will Fowler, the team’s leading scorer thus far averaging 14 points per game with 70 total, was injured. Add in that they were matched up against a Ridge View team that has scored over 60 points per game, and it was going to take a player stepping up big time to help push the Rebels to a win.

The Rebels certainly have a roster full of shooters that are capable of doing just that. Their 2nd leading scorer, Kayzzin McDowell was not far behind Fowler coming into today’s game, averaging 13.4 ppg. Senior Forward Jacson Walker and Sophomore Forward Evan Enos were shooting well over 50%, with Walker at 76% from the field.

The Rebels got a big performance with 2 players in double figures. Kayzzin McDowell finished with 17 points to lead all Byrnes scorers. Kobe Staggs logged 13, and Evan Enos just missed getting into double digits with 9.

The Rebels led most of the game, holding a 51-48 advantage with around 7:00 to play. That was after they began to go into a long scoreless skid. Byrnes scored just 4 points down the stretch, 2 on a layup and 2 more on a pair of free throws. Ridge View took full advantage and pulled away to win it 64-55, dropping the Rebels to 6-2.

Byrnes will return to action Tuesday night at home against Riverside.

Gaffney was the designated home team in game 2, taking on the #1 team in the state in all classifications – the Lancaster Bruins. The Indians are a very young team, featuring 7 sophomores and 1 incredibly talented 8th grade point guard whose name you will hear a lot in the near future – Rickey Littlejohn. That youth has led to a tough start to the season, coming into today’s game at 1-3. The Indians picked up their first win of the season Friday night, beating Union 70-50 behind a 19 point effort from Littlejohn.

Despite the youth, Gaffney managed to hang tough against the Bruins, who were 7-0 coming in, averaging nearly 70 points per game and beating opponents by an average of around 20 ppg.

Gaffney pulled to as close as 4 with around 3:30 to play in the game, but in the end, having been forced to foul to get the ball back and try to keep chipping away, they lost the battle at the line, falling 59-50.

Gaffney, now 1-4, gets back into action Tuesday night at 8:00 at home vs South Pointe.

Spartanburg hosted the Westwood Redhawks in game number 3 of the day. The Vikings are one of the 2 local programs that brought in new leadership prior to the season, hiring former Northwestern and Lower Richland Head Coach (and former Thomas Ryan assistant) Caleb Gaither as the new head coach. The Vikings have a lot of talent on the roster, and a heavy veteran presence with 5 seniors and 4 juniors.

Despite the talent and experience, the Vikings were off to a 1-4 start with losses to South Pointe, Laurens, Rock Hill, and Northwestern. Their lone win so far came at home, 70-66 over Clover. The Vikings’ struggles have mostly been on the offensive end, scoring just over 54 points per game while giving up an average of 62, dropping games by an average margin of 8.

In today’s game, the Vikings once again kept things close in an incredibly defensive battle. Neither team broke the 20 point mark until the final 4:00 of the first half, when after leading 17-14 briefly following a Que Moore 3 ball, the Vikings found themselves on the short end of a 12-3 run to end the half that carried over into the 2nd period. It was sparked by a scoreless streak by Spartanburg that spanned about 7 minutes from the last 2:00 of the first half all the way to around the 11 minute mark of the 2nd.

Once the Vikings finally managed to find the hoop, they found a rhythm. Behind a 7 point effort from Freshman Guard Dyllan Harris, Spartanburg pulled back to within 2. Following a layup from Junior Small Forward Makell Hiers and a 3 from Tony Webb, the Vikes took their first lead of the game 40-37 with 5:06 to play.

Westwood ended up reclaiming the lead with a 7-3 run, and the game came down to the final possession. Spartanburg called a timeout with 7 seconds left in the game to set up their final shot, which ended up falling short at the buzzer to give Westwood a hard-earned 44-43 win and drop the Vikings to 1-5 on the season.

Spartanburg will look to try to get things back on track Tuesday night at 7:30 against the Laurens Raiders at Viking Arena.

Dorman capped off the day with a matchup of 2 of the best programs in the state. They took on perennial 2A power WJ Keenan. The Cavaliers came in 7-1 on the season fresh off a dominant 79-48 win over Wade Hampton Friday night.

Thomas Ryan said that neither team would score 70 in this game. In fact, he went so far as to say in post game Friday night that they’d both be in the 50s. I think we all need to hit him up for the lottery numbers for tomorrow, since he ended up getting it exactly right.

The Cavaliers got off to a less than ideal start, struggling with shooting and hanging onto the ball over the first 3:00 or so of the game. But they found their groove and battled back. The 2 teams traded blows all night long with neither team really leading comfortably.

The Cavaliers led 30-23 at the half and had built up as much as a 10 point lead in the 2nd half before Keenan slashed their way back. Over a nearly 5:00 span from the 12 minute mark of the 2nd half to near the 8, Keenan cut the deficit to just a point, and took the lead on their next possession 43-42.

Dorman fought back with consecutive 3s from Chase Andrews and Christian Andrews to make it 47-43 in favor of the Cavs with about 6:00 to play.

Fast forward to the final minute.

Dorman committed several mental mistakes, allowing Keenan to once again pull it to a 1 possession affair. Ultimately, it came down to the battle at the line. The Cavs fouled on a 3 with :02 to play, sending the Raiders to the line with a chance to make it a 1 point game and maybe get the ball back with a chance to tie should they miss one.

Fortunately for the Cavaliers, they went 1-3 and despite an offensive rebound, could not get the tying shot off, resulting in Dorman getting the win 57-54 to move to 8-1 on the season.

The Cavs were led by Chase Harris, who hit 3 three pointers in the 2nd half to finish with 15 points. Sean Linsay followed up his big game Friday with another double figure performance, tallying 14 points. Dorman was 18-28 at the charity stripe, which went a long way in helping to secure the win.

Coach Ryan had this to say about how his team performed Saturday night. “Keenan defends hard and makes the game choppy. We went braindead on the final play. They had no timeouts, even if they make the 3, the clock just runs out. That will be a learning experience. But, I thought our guys made plays. We got in foul trouble; they were too. Both teams fouled too much. But we made the plays we had to. With 2 games in 2 nights, that 2nd {straight} night is always tough and tonight after playing well last night and coming easy by making shots, tonight was much more difficult. Give Keenan credit. We were just happy to get a win.”

The Cavaliers will return to action at home Tuesday night with another matchup with the Wade Hampton Generals, with tip set for 7:30 PM.