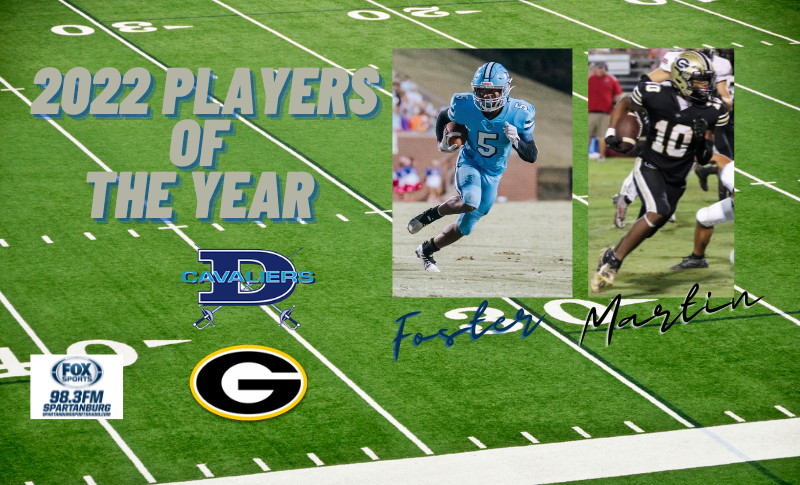 Foster and Martin Players of The Year

Now that high school football has officially ended here in 2022, we have time to reflect on the season and all the great stuff we saw this year.

Every year our staff gets together at the end of the year and decides on a player of the year from the teams we cover.  Usually we can settle on one player, but this year after discussions it was clear we could not reach and agreement on just one.

The two players we selected had tremendous years. Both had injury issues but still put up unbelievable numbers in the regular season.

Foster in the regular season had 184 carries for 1413 yards and 18 touchdowns.  He also had five catches for 31 yards, and a kickoff return for a touchdown.  He was instrumental in Dorman’s success this season.  The Cavs leaned heavy on Foster and he was able to carry the load.  This young man will make some college a great running back and we cannot wait to see what he can do when given the opportunity.

It seems like Greer always has an outstanding running back.  This year was no different. Martin appears to be the next in a long line of Greer running backs that have had terrific high school careers. The sophomore back only got to play in 8 games this year due to injury but was still able to score 19 touchdowns, rush for 1261 yards, and catch 8 passes for 179 yards.  This young man has the potential to be a star over the next couple of years for the Yellow Jackets and college coaches will be rushing to Dooley field.