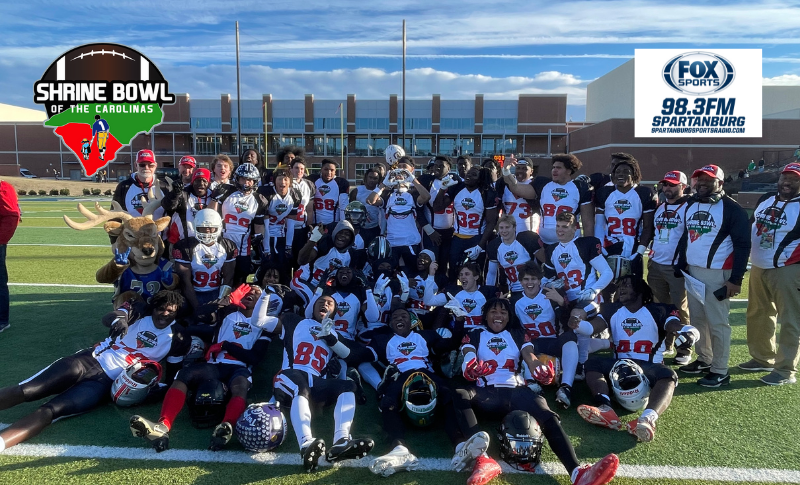 A beloved tradition in local high school football made its return after a 3 year hiatus Saturday afternoon. The best players from South Carolina and North Carolina met up for the 86th time in the nation’s oldest high school all-star game – the Shrine Bowl of the Carolinas, this time at a new venue. The game has been played at Wofford’s Gibbs Stadium since it moved to Spartanburg in 2004, but Saturday, it was played at Viking Stadium.

The Shrine Bowl has a certain reputation as far as the way the game goes and the weather.  This year was no exception. It was brisk with a lively breeze and partly cloudy, making for a perfect afternoon for some mid December football. The only thing colder than the weather was the offenses in the early going, which is also typical of the annual battle between the Tar Heels and Sandlappers.

Spartanburg’s Raheim Jeter got the nod to start for South Carolina on his home field. He would be used interchangeably with South Florence QB and fellow Mr Football Finalist LaNorris Sellers.

The Tar Heels won the battle at the line, bringing heavy pressure and forcing both Jeter and Sellers to have to make plays while on the run. They also made sure that Jarvis Green was limited, all made evident from the opening series.

Green ran for no gain on the first play, followed by back to back bad passes from Jeter. Fortunately, the Sandlappers’ defense was also strong. North Carolina running back Kemarion Baldwin fumbled the ball on third down on their opening series, setting the SC squad up around midfield.

LaNorris Sellers came in and drove the ball down to the NC 29 before throwing an incomplete pass to turn the ball over on downs, thus setting the stage for the defensive and chippy back-and-forth that was scoreless after a quarter.

South Carolina finally broke the ice midway through the 2nd quarter with a 24 yard fieldgoal that capped a 14 play, 77 yard drive that spanned 6:38. The Tar Heels responded with a long drive of their own, marching 76 yards on 16 plays, scoring on a 1 yard TD run by Kemarion Baldwin to take a 7-3 lead with :38 to play.

After trading three and outs to start the 2nd half, LaNorris Sellers connected with Clemson commit Tyler Brown wide open across the middle of the field for a 55 yard TD catch and run to put the Sandlappers back on top 10-7.

Then came the very eventful 4th quarter. North Carolina reclaimed the lead 13-10 on a 5 yard TD run off a QB keeper by Jaylen Alexander-Raynor (the extra point was blocked by Gaffney linebacker and Missouri commit Brayshawn Littlejohn), capping a 10 play 65 yard drive that was aided by a couple of untimely penalties on SC – a pass interference and a personal foul that gave the Tar Heels first downs on 3rd and 12 and 4th and 2.

With momentum swinging, the Sandlappers put together their best drive of the day. Raheim Jeter made his biggest play of the day on this drive, hitting Northwestern’s Elijah Caldwell for a 29 yard gain to get South Carolina on the right side of the 50. From there, the dynamic duo of LaNorris Sellers and Jarvis Green took over. They ended the 12 play, 78 yard march with a nice 1 yard TD run where Green bounced to the outside after getting hit at the line and dove into the endzone, putting the Sandlappers up 17-13 after the PAT.

After forcing another big 3 and out, South Carolina got the ball back with 2:55 to play in the game and was able to pick up a first down and run the clock out, securing their 2nd straight victory in the series, and upping the overall Shrine Bowl record, which is in favor of the Sandlappers, to 46-32-5.

Overall, South Carolina tallied 299 yards of total offense to North Carolina’s 182. Sandlapper offensive MVP LaNorris Sellers was 9 of 13 passing with 121 yards and a TD, along with 41 yards on 12 carries. Raheim Jeter finished 3-9 with 70 yards through the air. Elijah Caldwell led the way receiving with 4 snags totaling 61 yards.

Defensively, the Sandlapper MVP was Mikey Rosa, a linebacker from Wando. He tallied 7 solo tackles, with 3 of them for a loss. Broome linebacker Noah Quinn logged 2 solo tackles with a half tackle for a loss. Brayshawn Littlejohn finished with a sack, an assist, and a blocked PAT, while his Gaffney teammate Nathan Johnson logged just 1 tackle.