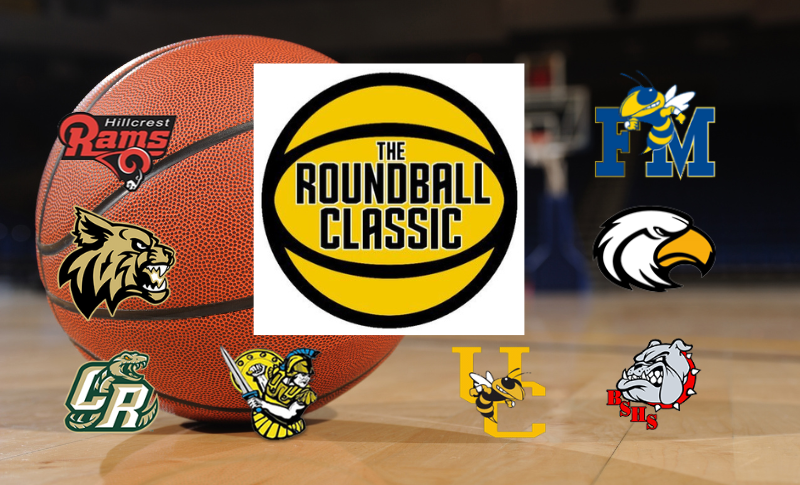 One of the most fun parts of the high school basketball season is the annual Christmas tournaments. In our area, there are 2 of these tournaments that always come with major bragging rights if your team can come away as the champion. One of those two is the Chesnee Roundball Classic.

Here is a brief breakdown of round 1.

Things got started with a battle between a very good Hillcrest taking on Broome. The Centurions were no doubt overmatched with the Rams being the much bigger and deeper team. But, that did not stop Will Hickson’s Broome squad from playing tough. After a slow start, Broome found themselves down just 8 after a quarter. They were ultimately done in by a 2nd quarter in which they mustered just 8 points to allow Hillcrest all the separation they needed, going into the half with a 39-20 advantage. Still, despite the Centurions falling in this one 71-51, perhaps the real storyline of this game is the play of Junior Shooting Guard Brady Poole.

Brady was the leading scorer for Broome all game long, with 13 points in the first half. He absolutely went off in the 2nd half with a 15 point 3rd quarter and a 5 point 4th, ultimately finishing with 33 points The next closest scorer for the Centurions was his brother Coyie Poole, a Sophomore Shooting Guard, who logged 8.

Game 2 of the opening round featured the Catawba Ridge Copperheads (Fort Mill, SC) vs Blacksburg. The Wildcats were obviously outmatched in this one in both depth and size, being a small 2A school going up against a 4A. But don’t let that fool you. There is a lot of fight in Coach Moe Sims’ team.

Catawba Ridge jumped out to a huge lead early, getting into the double digits less than 5:00 into the first quarter. Blacksburg just could not find the hoop, with every shot they put up seemingly being a floater that fell short by about a foot. The Wildcats managed just 9 points in the first quarter and trailed 21-9. But things took a turn for the better in the 2nd.

Blacksburg put together a 12-6 run to start the 2nd stanza to cut the Copperheads’ lead to just 6 points behind a strong effort from their 2 leading scorers from the game – Senior Power Forward Sam McSwain and Junior Small Forward Jacob Gilfillan. Both Gilfillan and McSwain tallied 6 points in the 2nd quarter on a pair of trey balls. They also managed to use their speed advantage to get in Catawba Ridge’s passing lanes to force a lot of turnovers.

Despite their effort to fight back, Catawba Ridge got hot again over the final minutes of the half, going on a 13-4 run to take a 40-25 lead to the break. In the end, the Copperheads pulled away for a 78-42 win.

The third game was a battle for Yellow Jacket supremacy. No, not the Jacket Bowl. But, still 2 schools who both have the nickname Yellow Jackets – Union County vs Fort Mill.

Union, much like the host Chesnee, has been playing a bit of a tough non-region schedule, with a 6-5 record on the season. They averaged nearly 56 points per game entering this tournament while surrendering an average of 52. They feature a lot of experience on their roster with just 6 underclassmen, and they are all capable scorers. What they don’t have is the depth to keep up with a team like Fort Mill.

Fort Mill is also loaded with upperclassmen, with just 1 sophomore and 1 freshman on the roster. There is also the fact that if Union has played a tough schedule, Fort Mill’s has been murderers’ row. The “other jackets” have played Collins Hill (Ga), Indian Land (twice), Catawba Ridge, and River Bluff. Of their 4 losses in that schedule, 3 of them have been by 3 points or less.

In essence, Union had their work cut out for them and would need to play nearly flawless to pull this one off. They didn’t, digging into a hole early and struggling to score. Fort Mill led 32-15 at the half. In the second half, Union rallied, but never could cut the deficit enough to have a chance to strike, falling 66-43.

The nightcap of the opening round was a familiar matchup between rivals from across their respective school district. Round 3 of the “District 2 Rivalry” between the red-hot Boiling Springs Bulldogs and the host Chesnee Eagles.

Boiling Springs, who had won 6 in a row coming into the tournament, including sweeping the first 2 meetings with the Eagles, got off to a hot start in this one, taking the lead from the opening bell when the Dogs won the tip and quickly jumped up 3 on a WJ Fowler long ball.

Tre Locklear further helped set the tone with a 7 point showing in the opening 5 minutes of the game, which with the aid of Chesnee struggling to possess the ball and score when they had their chances, helped propel the Bulldogs to a 14-5 lead. In the 2nd frame, the Eagles continued to struggle with turnovers and scoring while Tre Locklear and Reese Walter combined for 9 of the Bulldogs’ 13 points in the stanza to make for a 31-15 halftime lead.

Things got out of hand in the 3rd quarter as Freshman Forward/Center Isaiah Atkins put on a dunk show while also going 4 for 6 at the freethrow line and WJ Fowler hit on 3 consecutive three pointers as part of a 31 point outburst for Boiling Springs.

Chesnee managed to outscore the Bulldogs’ backups in the 4th quarter 11-9, but that was far too little too little, as the Bulldogs routed Chesnee 71-39.

The tournament will continue Wednesday afternoon as the losers bracket games get started at 3:00 PM with Broome taking on Union County.

The 2nd losers bracket game will start at 4:30 and will feature Chesnee vs Blacksburg (a matchup we will see 2 more times this season since they are in the same region).

In the winners bracket, Hillcrest will battle Fort Mill with tip off set for 6:00.

Boiling Springs will go for their 8th straight win in the nightcap with Catawba Ridge, with tip set for 7:30 PM.