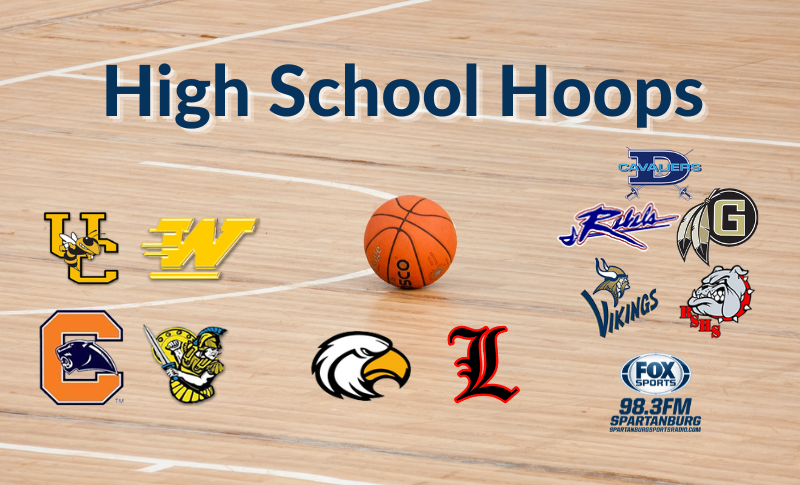 Battle at the Border Round 1

This week marks another great local holiday tradition for high school basketball in our area – the annual Battle at the Border Tournament at Landrum High School. The 23rd installment of the tournament features several of our teams competing in both the boys’ and girls’ brackets.

The ladies’ bracket started off with Woodruff vs Gaffney. Chapman took on the Southside Tigers in game two. Boiling Springs would play Blue Ridge in game 3, and the homestanding Landrum Cardinals were slated to play Carolina Forest in the final game.

On the boys’ side, things opened with Blue Ridge vs St. Joe’s. Woodruff would take on Shannon Forest in game 2. Broome and Spartanburg Christian Academy were matched up for game 3, while the nightcap would be an all district 1 game featuring Chapman vs Landrum.

I was unable to catch this one, but it does not seem I missed much. It was a total mismatch and it showed on the scoreboard. Gaffney drubbed Woodruff 84-26.

If you like defense, this may have been the game for you. The Chapman girls are a team that tends to thrive on the long ball. When they can’t get the shots to fall from beyond the arch, they tend to have a tough time overcoming it. That was what ended up happening. The Tigers limited Chapman’s looks from 3 point range and forced them to have to win the battle in the paint. Both teams defended well inside. But in the end, Southside pulled away for the 48-31 win.

The Panthers were led by Sophomore Chrislyn Wilder, with 12 points. Their next closest scorers– Clara Gramling and Kara Twitty, scored 6 a piece.

For the Knights, Josh Burns and Hunter Coleman both added 7 points while Alex Gillespie and Gabe Nelson scored 6 a piece.

The Woodruff Wolverines found themselves dug into a deep mess in the 4th quarter. They were trailing by 20 and just seemed to be a young team (just 5 upperclassmen on the roster) that was  outmatched by a very good (8-1 and averaging 71 points per game coming into the tournament),

experienced, and deep Shannon Forest team out of the SCISA.

Woodruff put together a rally late in the game in which they managed to come up with several steals in a row, each resulting in a fast break layup on the other end that helped to cut the deficit, but it was far too little too late. In the end, Shannon Forest won it 73-47.

In similar fashion to the Chapman girls’ game, this one was a defensive slugfest up until the final 8:00. Boiling Springs led 14-10 after a quarter. Then they went cold over the middle 16 minutes of the game, scoring just 6 in the 2nd and 7 in the 3rd. During that stretch, they struggled to defend, particularly 1 player – Sophomore Guard Anyah Henderson, who led the way for the Tigers with 16 points. 10 of those came during the middle 2 quarters.

Despite the struggles, the Lady Bulldogs had made a game of it. After the 3rd quarter, they trailed by just 6 and managed to pull as close as 3 before Blue Ridge pulled away for the 52-41 win.

Boiling Springs was led by Senior Guard Amiyah Ellis with 12 points. Senior Guard Kylie McMillan was the next closest with 10.

Junior Forward Claire Skinner and Freshman Guard Audrey Harkins were the other 2 notable performances from Blue Ridge, with 12 and 7 points, respectively.

In a battle between a 2A school and a 5A school, you generally always expect the 5A squad to win simply because they are deeper and usually have more talent at their disposal. Simply put, that was not the case in this one. The Landrum Lady Cardinals gave Carolina Forest all they could handle for the entirety of the game.

Landrum led for the entirety of the first half, taking a 28-19 advantage to the intermission, mostly behind a stellar performance from their leading scorer in this game, Junior Center Savannah Brown. She tallied 9 in the first half (19 over the course of the game). It was the 3rd quarter that flipped the game. The Panthers went on a 12-2 run that spanned the first 4 minutes of the stanza, aided with several turnovers by Landrum, which set the tone for the comeback. Landrum scored just 7 points in the 3rd, and ultimately, Carolina Forest never looked back.

The Lady Cards still never wavered even when they found themselves trailing, managing to pull back to within 4 before Carolina Forest got them in a position to where they had to defend by fouling. The Panthers were able to salt it away at the freethrow line for a 58-49 win.

Aside from Savannah Brown, Landrum was led by Junior Point Guard Kaylee Cortez with 11 points. Junior Guard Sydney Price was the only other Cardinal close to double digits with 6.

If anything day one of this tournament has taught, it is not to overlook the private schools. Shannon Forest is a really good team that took it to Woodruff with ease. Spartanburg Christian Academy is just the same. The Warriors were winless coming into the tournament. So, if you were going by record/numbers alone, you would be strongly tempted to say that Broome should easily run away with this game. Well.. in the infamous words of Lee Corso.. “Not so fast, my friend.”

To say SCA has played a brutal schedule so far would be a gross understatement. Of their 10 losses, several have come to 5A public schools – Byrnes, Clover, and Gaffney. They also have 2 losses to good 4A teams in York and Laurens. They have also played St Joe’s and High Point Academy. So to see that they were 0-10 and have given up 611 points is completely understandable.

In reality, this team is very talented, and it showed in how they played against Broome.

Take nothing away from Broome, but at this point, you have an idea of what they are. What the Centurions are is a lot of good pieces, but not quite a team that has put all those pieces together yet. They have the Poole brothers – Brady and Coyie, and they have a couple of nice interior presences in DT Thompson and Steven O’Dell. I truly believe that this Broome team can be great once they manage to gel and become a complete team. Until then, if you can find a way to contain the Poole brothers and keep them from getting the ball, much less getting any good looks to shoot, you can beat them.

That is what SCA did. The Warriors shot the lights out from beyond the arch, jumping to a 17-7 lead after a period and only managed to build from there, taking a 39-18 lead to the break. They held Broome to single digits until the final 3:00 of the first half when Brady Poole finally managed to help the Centurions offense get going. Brady had 11 points in the first half, accounting for all but 7 of their first half points.

The woes continued in the 2nd half for Broome, as they mustered 22 points. Normally, one would be inclined to say that is good (and it is), but the Warriors hung 31 on them to cruise to their first win of the season, knocking off the Centurions 70-40.

Broome was led by Brady Poole with 17 points. DT Thompson and Coyie Poole were the next closest with 6 points each.

The Warriors were led by Senior Point Guard Dawson Ward and Freshman Shooting Guard Lake Wagner. They both logged 18 points.

The nightcap of day 1 of the tournament was a much-anticipated battle between cross-district rivals, and man did it ever live up to the billing. It was everything you could have wanted in a final game of the day and then some.

In the first half, the enthusiasm from the crowd from Inman looked like it may not last long. The game was close for about 5:00 before Landrum went on a tear to take a 21-12 lead at the end of the first quarter. At the half, Landrum led 36-23. Six different Cardinals notched their way into the scorebook in the first half with Senior Guard Marco Gonzalez leading the way with 9 points as well as Junior Guard Franklin Davis and Sophomore Guard Bennett Edwards each tallying 8.

If there was any waning of fervor from the orange-and blue-clad folks, it came back fairly quickly in the 2nd half. Chapman opened the 3rd quarter on a 10-2 run, and outscored the Cardinals 27-14 in the stanza to work their way back in and set the stage for an incredible back and forth that would end up coming down to the wire.

During the 3rd quarter, the Panthers did a good job of limiting Landrum’s interior threats from getting to the rim. Marc Baker, Franklin Davis, and Bennett Edwards were held to just a combined 8 points. Unfortunately for Chapman, they could not carry that over into the 4th quarter. Davis and Edwards combined to score 13 points in the final frame.

Despite all of that, Shawn Cunningham’s valiant effort helped the Panthers stay in striking distance. Cunningham led the way for Chapman with 24 points. 14 of those came in the final 2 quarters.

In the end, as these close and crazy games so often tend to do, it came down to the Panthers being forced to foul when down 6 late in order to try and get more possessions. Also, as so often happens, that propelled the Cardinals to the win, knocking off Chapman 68-64.

Landrum was led by Bennett Edwards with 18 points. Franklin Davis was not far behind, logging 17. Marco Gonzalez finished with 13 while Mario Gonzalez and Marc Baker scored 8 each.

Aside from Cunningham, Chapman was also led by Senior Guard Daniel Johnson with 11 points. Freshman Guard Colby Moon tallied 10 while Mathai Scott just missed out on double digits with 9.

With the opening round in the books, here is the bracket for day 2 of the tournament.

Boiling Springs vs Landrum 11:30 AM